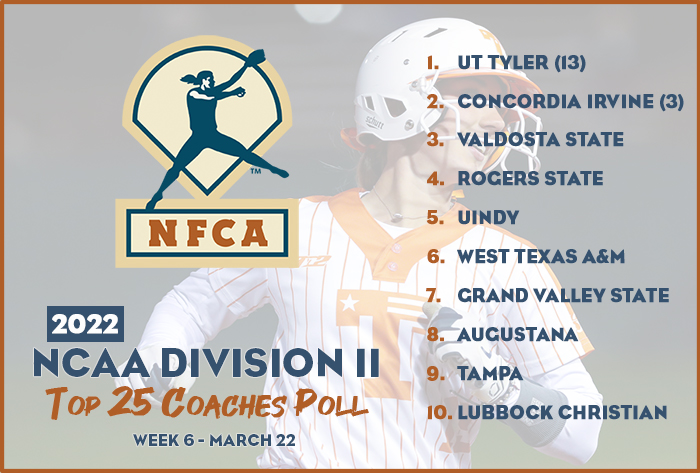 UT Tyler swept a pair of LSC doubleheaders, pushing across 49 run in wins over Texas Woman’s and Midwestern State.

Valdosta State remained at No. 3 with No. 4 Rogers State and No. 5 Indianapolis switching spots. The Blazers (19-4) cruised to a Gulf South series sweep of Shorter. The Hillcats (20-2) were idle and the Greyhounds (20-2) posted a 3-1 mark in Florida, earning victories over New Haven, Saint Anselm and Caldwell.

No. 6 West Texas A&M enjoyed a 5-1 week, picking up five LSC wins, including a doubleheader sweep of then-No. 9 Texas A&M-Kingsville. No. 7 Grand Valley State blanked Tiffin twice in its only action from last week.

No. 8 Augustana, No. 9 Tampa and No. 10 Lubbock Christian all moved up with the latter two, joining the top 10. The Vikings (16-5) swept Northeastern State and split at Central Missouri.

Extending their win streak to nine, the Spartans (20-8) swept Sunshine State foe Saint Leo in a three-game set. The Chaparrals (25-3), who went 6-0 against LSC opposition, have won seven straight and 25 of their last 26 contests.

The 2022 NFCA Division II Top 25 Poll is voted on by 16 NCAA Division II head coaches with two representing each of the eight NCAA regions. Records reflect games played through March 20.