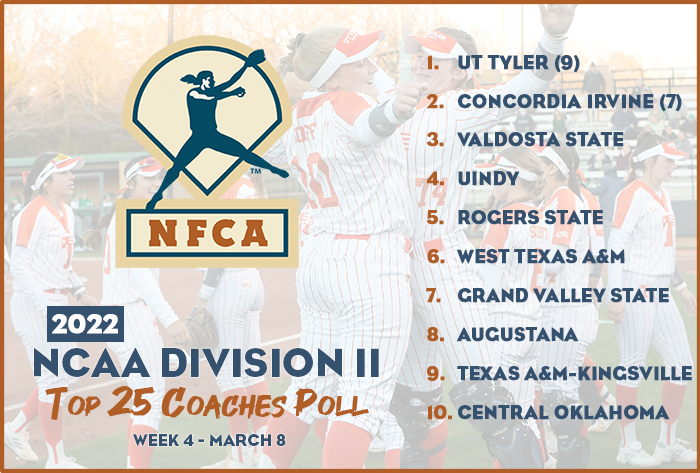 UT Tyler split its Lone Star Conference (LSC) twinbill on the road at then-No. 4 West Texas A&M, dropping the opener, 7-5. The Patriots rebounded with a 6-5 win in the nightcap and continued on the road with a LSC sweep of Eastern New Mexico.

The Eagles (20-0) completed a four-game Pacific West Conference (PacWest) sweep of Academy of Art on Feb. 28. CUI cruised to 8-2 & 9-1 triumphs and is off to its best NCAA Division II start in program history.

Valdosta State remained at No. 3 with Indianapolis and Rogers State moving into the No. 4 and No. 5 spots. The Blazers (16-4) split on the road in non-conference action at Flagler and swept a Gulf South Conference series from Montevallo, while the Greyhounds (13-1) and Hillcats (18-2) picked up two and four non-conference wins away from home, respectively.

The Lady Buffs (12-5) dipped to No. 6 after a 1-3 start in LSC play. Following its split with the Patriots, WT dropped both ends of a doubleheader against then No. 23 Texas A&M University-Commerce.

Grand Valley State (6-0) remained at No. 7 as it opened its Spring Break trip to Florida with a 3-1 triumph over Winona State.

Augustana moved up two spots to No. 8, while No. 9 Texas A&M-Kingsville and No. 10 Central Oklahoma appeared in the top 10 for the first time in 2022. The Vikings (6-3) swept Northwest Missouri State on March 4.

The Javelinas (19-2), who went 6-1 last week, extended its winning streak to 19 games before falling in game two in LSC play at then-RV St. Mary’s. The Bronchos (17-3) picked up five non-conference wins during a 5-1 week that saw their 13-game win streak snapped at Drury.

The 2022 NFCA Division II Top 25 Poll is voted on by 16 NCAA Division II head coaches with two representing each of the eight NCAA regions. Records reflect games played through March 6.