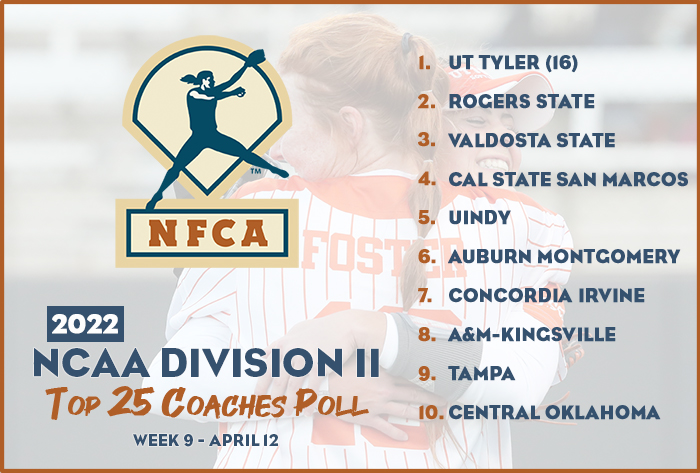 LOUISVILLE, Ky. – UT Tyler is once again the unanimous No. 1 team in the 2022 Division II Top 25 Coaches Poll. Fresh off a 4-0 weekend in Lone Star Conference (LSC) play, the Patriots (34-4) were voted unanimously on top for the fourth time this season and have been No. 1 in nine of the ten polls.

UT Tyler swept then-RV St. Mary’s and St. Edward’s in its final two LSC road doubleheaders of the season. The undefeated weekend was capped off by Kaylee Davis’ first career no-hitter, in a 1-0 victory over the Hilltoppers.

No. 2 Rogers State and No. 3 Valdosta State each moved up one spot in this week’s rankings. The Hillcats (35-3) and Blazers (27-5) enjoyed undefeated weekends on the road in league play. RSU escaped Missouri Western with a 2-1 (10 inn.) & 3-1 wins and thumped Northwest Missouri State by a combined score of 25-1. VSU scored 32 runs in their three-game sweep of West Georgia.

Indianapolis (34-4) picked up six wins in Great Lakes Valley Conference play and stayed at No. 5. Riding a 13-game win streak, Auburn Montgomery elevated to No. 6. The Warhawks (30-6) ran by Union, outscoring the Wolves in a three-game Gulf South Conference sweep.

Texas A&M-Kingsville slipped one spot to No. 8 after splitting LSC doubleheader against No. 11 Angelo State and then-No. 15 Lubbock Christian. Tampa, who was idle last week, fell to No. 9, and Central Oklahoma remained No. 10.

Earning a spot in the poll for the first time this season is No. 25 East Stroudsburg (26-4).

The 2022 NFCA Division II Top 25 Poll is voted on by 16 NCAA Division II head coaches with two representing each of the eight NCAA regions. Records reflect games played through April 10.

New to Poll: No. 25 East Stroudsburg

Dropped Out:  No. 25 Carson-Newman