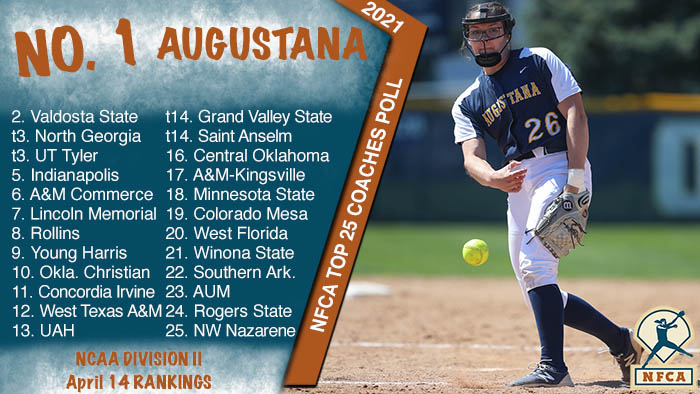 Tenth-ranked Oklahoma Christian returned to the top-10, while No. 23 Auburn University at Montgomery (AUM) and No. 25 Northwest Nazarene made their NFCA ranking debuts. The Eagles (27-5) captured four Lone Star Conference (LSC) victories with sweeps of Eastern New Mexico and then-No. 10 West Texas A&M.

The Warhawks (26-5) are on a six-game win streak, highlighted by a pair of wins at then-No. 1 North Georgia on April 6. NNU improved to 22-8 on the season following a 4-2 road swing in California. The Nighthawks earned splits versus then-No. 14 Concordia Irvine and Academy of Art and swept two contests from Dominican University.

The top 10 did see some shifting amongst its inhabitants. Valdosta State elevated to No. 2, North Georgia and UT Tyler are tied at No. 3, and Indianapolis continued its rise with a jump to No. 5. The Blazers (25-3) and the fifth-ranked Greyhounds extended their respective win streaks to 14 and 18 games with undefeated showings in conference play.

The NightHawks (22-4) rebounded from their losses to AUM with sweeps of Emmanuel and Georgia Southwestern. The Patriots (25-5) went undefeated on the road in LSC play, taking doubleheaders from then-No. 12 Texas A&M-Kingsville and RV Texas A&M International.

Texas A&M University-Commerce (21-8) dropped to No. 6 after it split with A&M-Kingsville and TAMIU in a pair of LSC twinbills on the road. No. 7 Lincoln Memorial (29-4) collected four more South Atlantic Conference triumphs, while No. 9 Young Harris split at home with then-No. 15 UAH.

The 2021 NFCA Division II Top 25 Poll is voted on by 16 NCAA Division II head coaches with two representing each of the eight NCAA regions. Records reflect games played through April 11. In 2021, universities that are not competing will not be eligible for the poll.

New to Poll: No. 23 Auburn Montgomery, No. 25 Northwest Nazarene