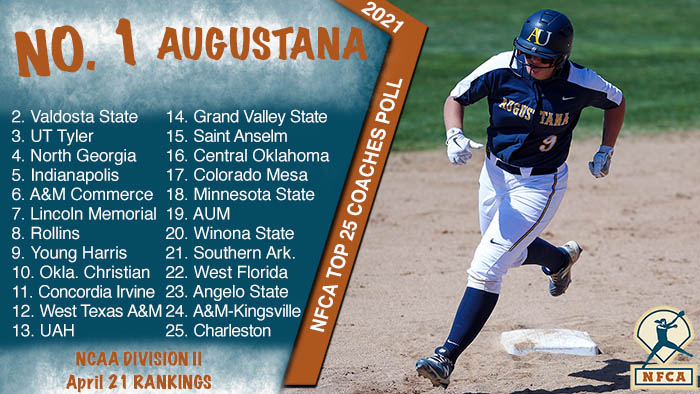 Outside of two ties being broken, the top 16 teams remained the same, while Angelo State returned to the poll at No. 23 and University of Charleston cracked the rankings at No. 25 for the first time in 2021.

The top 13 teams went a combined 50-3 and with two of those defeats coming in a doubleheader split between then-No. 3 (tie) North Georgia and No. 13 University of Alabama in Huntsville. No. 5 Indianapolis, which received one first-place vote, matched Augustana with six wins and ran its win streak to 24 games, the longest active streak in NCAA Division II.

Also undefeated last week were 2-0 showings by No. 3 UT Tyler, No. 6 Texas A&M University-Commerce and No. 11 Concordia Irvine with No. 19 Auburn Montgomery sweeping Mississippi College on the road and No. 20 Winona State taking a pair of NSIC doubleheaders from Bemidji State and Minnesota Crookston.

Angelo State ran its win streak to 10 games with five wins last week, while Charleston went 5-1 and improved to 24-6 on the season.

The 2021 NFCA Division II Top 25 Poll is voted on by 16 NCAA Division II head coaches with two representing each of the eight NCAA regions. Records reflect games played through April 18. In 2021, universities that are not competing will not be eligible for the poll.

Dropped Out: No. 24 Rogers State, No. 25 Northwest Nazarene