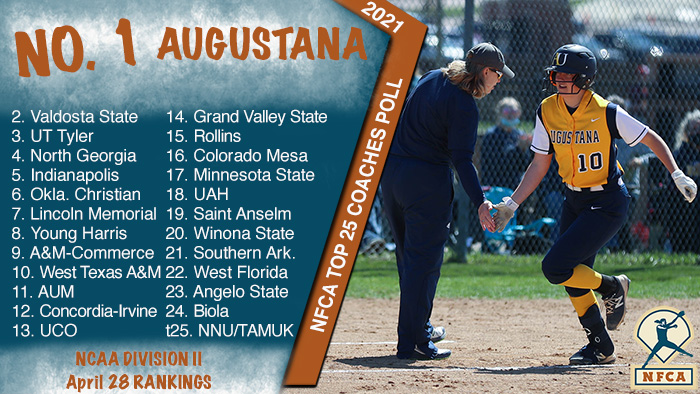 Additionally, Biola (19-13) makes its first appearance in the NFCA’s DII poll at No. 24 and Northwest Nazarene returned to the rankings, tying for No. 25. Also, two programs – Oklahoma Christian and Auburn Montgomery - made significant leaps to No. 6 & No. 11, respectively

The Vikings (32-4) posted a 5-1 week in Northern Sun Intercollegiate Conference play. They split a pair of one-run affairs in a road twinbill against crosstown rivals Sioux Falls before returning home to sweep Minnesota State Moorhead and Northern State.

The second-ranked Blazers (32-3) enter this week on a 21-game win streak, the longest active in Division II, after they cruised to three Gulf South Conference (GSC) wins against Christian Brothers. VSU outscored the Bucs 39-4, launching 11 more home runs to improve on their NCAA DII-leading 87 long balls. The Blazers wrap up the regular season with a key GSC series at No. 18 University of Alabama in Huntsville.

No. 5 Indianapolis had its 25-game win streak halted after a split on the road at Great Lakes Valley Conference (GLVC) foe Drury. The Greyhounds (34-4) rebounded from their first loss since March 17 with a sweep of Missouri S&T.

The sixth-ranked Eagles (33-5) catapulted four spots after a pair of key one-run LSC victories over then-No. 6 Texas A&M University-Commerce. With the two defeats, the Lions (25-12) dipped to No. 9. A&M-Commerce will host third-ranked UT Tyler on May 1.

Lincoln Memorial remained in the seventh spot. The Railsplitters (36-6), upset in the South Atlantic Conference Tournament championship game by Tusculum, finished the weekend 2-1.

Young Harris went 3-1 last week in Peach Belt Conference action and moved into the No. 8 spot, while West Texas A&M returned to the top 10 at No. 10 following four LSC wins.

Seven of No. 24 Biola’s wins are against PacWest Conference foe, No. 12 Concordia Irvine (22-11), and one more over NCAA Division I San Diego.

The 2021 NFCA Division II Top 25 Poll is voted on by 16 NCAA Division II head coaches with two representing each of the eight NCAA regions. Records reflect games played through April 25. In 2021, universities that are not competing will not be eligible for the poll.

Dropped Out: No. 25 Charleston