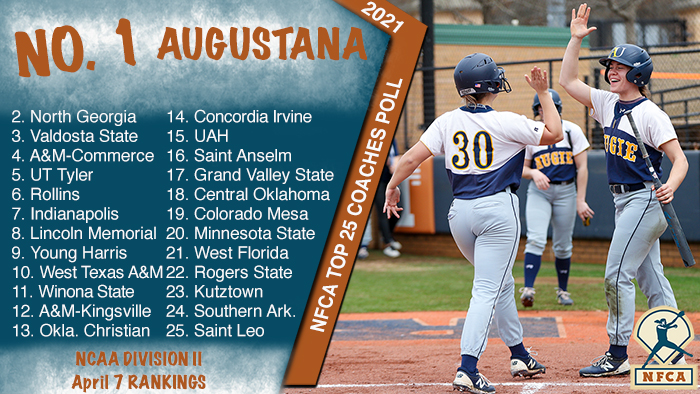 The three programs – No. 2 North Georgia (4), No. 3 Valdosta State (1) and No. 4 Texas A&M University-Commerce (1) – immediately behind Augustana also received at least one first-place nod apiece.

The Vikings (17-3), who were tied for second last week, swept Central Missouri in non-conference action before posting a 5-1 mark in Northern Sun Intercollegiate Conference play. On the road, Augustana swept Wayne State College and Minnesota Duluth, while splitting with St. Cloud State. The Vikings, who had their 11-game win streak snapped, have won 14 of their last 15.

Amongst the rest of the top 10, which welcomes Young Harris at No. 9, only No. 3 Valdosta State and No. 7 Indianapolis enjoyed undefeated weeks. The Blazers (22-3) climbed one more spot following a Gulf South Conference (GSC) series sweep at Delta State, while the Greyhounds (21-2) moved up two positions and reached the 20-win plateau after taking Great Lakes Valley Conference doubleheaders from Southern Indiana and University of Missouri St. Louis. Both VSU and UIndy enter the week on double-digit win streaks at 11 and 14 games, respectively.

The second-ranked NightHawks (18-2) suffered their first two defeats of 2021. Previous No. 1 UNG swept Augusta at home before splitting a pair of twinbills on the road versus Newberry and Young Harris. Along with a victory over North Georgia, the ninth-ranked Mountain Lions (21-6) came away with another top-10 win, taking one-of-two from No. 8 Lincoln Memorial.

No. 6 Rollins (10-1) stayed steady at No. 6 and No. 8 Lincoln Memorial (25-4) dropped one spot to No. 8. The Tars took two-of-three from then-No. 23 Saint Leo in Sunshine State Conference play, while the Railsplitters’ only action was a road split against Young Harris.

The 2021 NFCA Division II Top 25 Poll is voted on by 16 NCAA Division II head coaches with two representing each of the eight NCAA regions. Records reflect games played through April 4. In 2021, universities that are not competing will not be eligible for the poll.