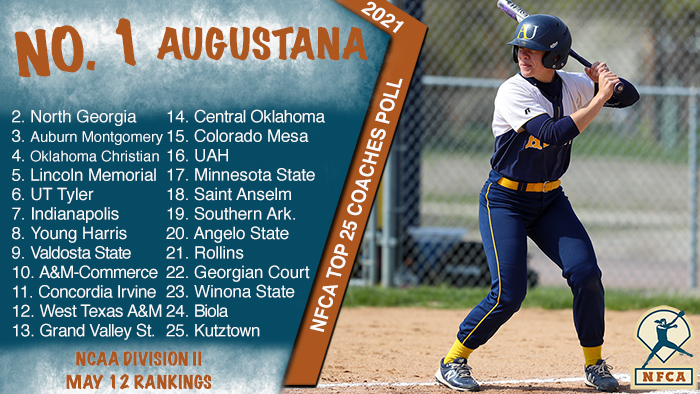 LOUISVILLE, Ky. – Augustana enters its sixth straight week at No. 1 in the NFCA DII Top 25 Coaches Poll.  The Vikings (40-4) swept their final two Northern Sun Intercollegiate Conference doubleheaders to claim the league’s regular-season title. This is the final poll of the regular season. The final national rankings will be announced following the NCAA Division II National Championship on June 9.

With two wins each over then-No. 20 Winona State and Upper Iowa, Augustana captured its fourth NSIC title, first since 2015. The Vikings enter the tournament as the top seed and open play on May 13.

Regular-season Peach Belt Conference champions and No. 2 North Georgia reached the league’s title game with a 6-1 win over Columbus State University, setting up a date with No. 8 Young Harris, 7-4 winner over UNC Pembroke.

No. 4 Oklahoma Christian wrapped up its regular season with a doubleheader sweep of then No. 2 UT-Tyler. No. 7 Indianapolis won five elimination games to capture the Great Lakes Valley Conference Tournament championship, earning the league’s automatic NCAA bid.

Fourth-ranked Oklahoma Christian, 10th-ranked A&M-Commerce, 12th-ranked West Texas A&M and 20th-ranked Angelo State are part of the 10-team field for the 2021 LSC Tournament hosted by the No. 4 Eagles.

The 2021 NFCA Division II Top 25 Poll is voted on by 16 NCAA Division II head coaches with two representing each of the eight NCAA regions. Records reflect games played through May 9. In 2021, universities that are not competing will not be eligible for the poll.

Dropped Out: No. 19 West Florida

The 2021 NFCA Division II Top 25 Coaches Poll is voted on by 16 NCAA Division II head coaches with two representing each of the NCAA’s eight regions. Records reflect games played through May 9.