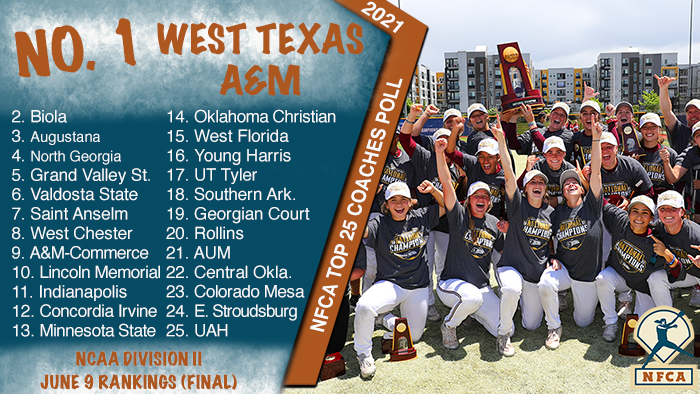 The top eight spots were filled by each of the NCAA Division II’s region champions.

West Texas A&M, the South Central Region champions, posted an 8-2 mark during its NCAA postseason run. After sweeping through the Lone Star Conference (LSC) tournament, the Lady Buffs defeated three more LSC opponents in Regionals. It included a win over No. 1 seed Oklahoma Christian and a victory in the winner-take-all game versus host A&M Commerce.

At the national tournament, the Lady Buffs went 3-0 during bracket play, defeating the top three seeds – Augustana, Saint Anselm and Grand Valley State – to reach the Championship Series. After dropping the opener to Biola, West Texas A&M trumped the Eagles 7-4 and 4-1 to raise the trophy.

Second-ranked Biola, playing in its first NCAA postseason, came out of the West Region. In the Regional, Biola defeated Northwest Nazarene and Hawai’i Hilo, and after dropping a one-run affair to host Concordia Irvine, rebounded with a 2-1 win in the winner-take-all matchup.

Like the Lady Buffs, the Eagles swept through bracket play. However they enjoyed shutouts against No. 1 overall seed Augustana and No. 4 seed North Georgia twice. The momentum continued with a shutout in game one of the Championship Series before falling to WT.

Defending national champion Augustana and seven-time Peach Belt Conference titlist North Georgia reached the national semifinals and ranked third and fourth. The Vikings (49-8) swept the Central Regional with one-run wins over Southern Arkansas and Minnesota State, followed by a 7-0 triumph over the Mavericks.

The NightHawks (43-8) took a different route to the national championship, battling out of the elimination bracket on their home turf. After dropping game two of the regionals to Lincoln Memorial, UNG posted wins over Young Harris and two on the final day over the Railsplitters.

No. 5 Grand Valley State (45-10), out of the Midwest Region, needed to win the if-game over Indianapolis, while the Blazers claimed three elimination-game victories, two on the final day against West Florida, to come out as the South Region champs.

No. 7 Saint Anselm and No. 8 West Chester won the East and Atlantic Regions. The Hawks (33-7) were forced to an if-necessary game by top-seed Georgian Court, while the Rams (34-16), as the No. 3 seed, swept through the Regional with wins over Claflin, Shepherd, West Liberty and East Stroudsburg.

The 2021 NFCA Division II Top 25 Poll is voted on by 16 NCAA Division II head coaches with two representing each of the eight NCAA regions. Records reflect games played through June 1. In 2021, universities that did not compete were not eligible for the poll.

The 2021 NFCA Division II Top 25 Poll is voted on by 16 NCAA Division II head coaches with two representing each of the eight NCAA regions. Records reflect games played through June 1. In 2021, universities that did not compete were not eligible for the poll.