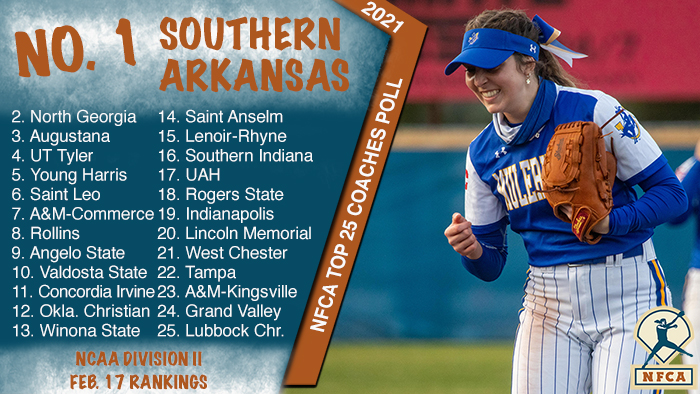 SAU knocked off DSU, 17-0 and 12-5, to extend its winning streak to 18 games. Like many programs across the country, the Muleriders endured multiple postponements due to the inclement weather.

North Georgia, idle Augustana, University of Texas at Tyler and Young Harris followed Southern Arkansas to make up the top five. The NightHawks (6-0) earned the other first-place vote (381 points) following a perfect start to the season. UNG opened with three shutouts, and after a one-run win over West Florida, exploded offensively in a pair of run-rule triumphs over Hillsdale (18-2, 12-2).

Other top-10 programs that saw action in the opening two weeks were No. 7 Texas A&M University-Commerce, No. 9 Angelo State and No. 10 Valdosta State. Hosting the 2021 Lion Invitational, A&M-Commerce collected two shutout wins over Texas A&M International (13-0, 6-0) and split with Arkansas Tech (5-3, 1-4).

Tenth-ranked Valdosta State rounds out the top-10. The Blazers (2-1) rebounded from an opening loss at Flagler (0-1) to top Ursuline (9-1) and Georgia Southwestern (7-1).

Trevecca Nazarene, who entered the preseason at No. 10, fell out of the poll following an 0-4 start to the season.

The 2021 NFCA Division II Top 25 Poll is voted on by 16 NCAA Division II head coaches with two representing each of the eight NCAA regions. Records reflect games played through February 14. In 2021, universities that are not competing will not be eligible for the poll.