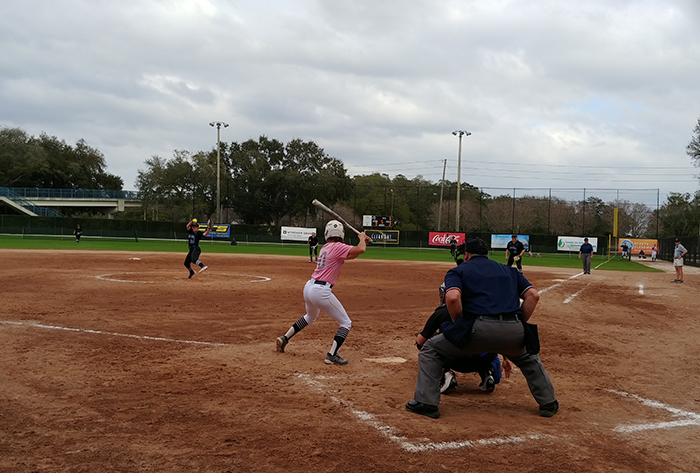 The Blazers and Panthers head into the final day as the favorites for the 2019 Leadoff title. However, five teams – West Florida, Lee, North Georgia, Harding and Tampa – with 3-1 marks are still in the hunt.

No. 22 Valdosta State takes on Tampa, while Florida Tech faces of against No. 20 Lenoir Rhyne at 11 a.m. Also at that time slot will be Harding versus Lee and West Florida against No. 8 West Chester.

The Argos, one of seven teams to post 2-0 marks, witnessed two of those feats in their game against California (Pa.). Tori Perkins (pictured) twirled the first no-hitter of the weekend, fanning seven and walking two in a six-inning win (8-0) over California (Pa.). It was the first Argo no-hitter since Feb. 5, 2015 (Sarah Malony vs. UMSL).

UWF’s Teala Howard capped off the win over the Vulcans in style, rounding the bases in 11.1 second for an inside-the-park home run. Following that, the Argos dug out of an early 5-2 hole with nine unanswered runs in an, 11-5, upset win over No. 18 Palm Beach Atlantic.

Not long after Perkins’ gem, Southern Arkansas’ Sydney Wader struck out two in a five-inning no-hitter against Tampa. Her no-hitter followed a wild walk-off 1-0 win for the second-ranked Muleriders over West Georgia.

With the game scoreless in the bottom of the seventh, SAU loaded the bases with no outs. After two quick outs, Sarah Evans struck out swinging, but the ball skipped past the catcher, allowing her to reach first safely and pinch runner Taylor Stricklin scooted home with the winning run.

The 22nd-ranked Blazers’ pitchers continued to shine with two more shutouts against No. 20 Lenoir-Rhyne, 6-0, and Azusa Pacific, 1-0. Caylie Van Auken and Avery Lamb each tossed three-hit shutouts with nine and eight strikeouts, respectively.

Florida Tech kept marching along with 4-2 and 8-0 wins over Molloy and California (Pa.). Jordan Lawlis blanked the Vulcans in game two, while the Panthers used a five-run first and three-run fourth to seal the win. Against the Lions, they fell behind 2-0, but scored four runs in the fourth to rally for the victory.

North Georgia, Lee and Harding also enjoyed undefeated Saturday’s. The Nighthawks trumped Hillsdale, 6-3 and Azusa Pacific, 1-0, while the Flames toppled No. 8 West Chester, 8-2 and edged Eckerd, 3-2, and the Bisons posted a pair of three-run wins over No. 5 Saint Leo (8-5) and West Georgia, 4-1.

The tournament concludes on Sunday with 10 games.