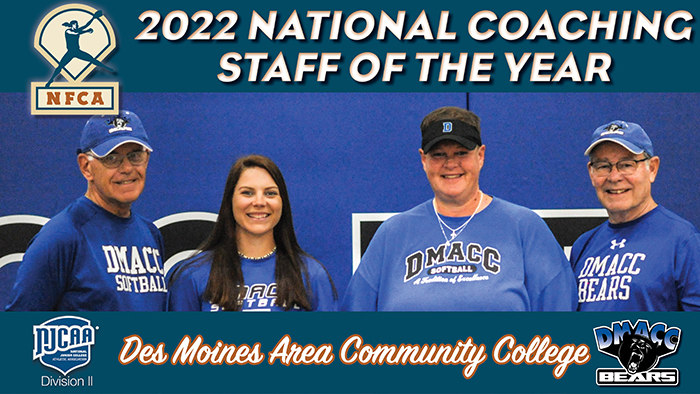 LOUISVILLE, Ky. –Des Moines Area Community College was voted by its peers as the 2022 NFCA NJCAA DII National Coaching Staff of the Year, the Association announced on Monday afternoon.

Head coach Bob Ligouri guided DMACC to a semifinal appearance and fifth place finish at the NJCAA DII National Championship tournament. The Bears, who finished 52-5, entered tournament on a 29-game win streak and the top-seeded team. DMACC extended their streak to 31 games with victories over No. 16 WVU Potomac State and No. 9 Kansas City Kansas Community College before dropping contests to national runner-up and No. 4 Murray State College and No. 7 Kirkwood.

Along with the help of assistant coaches Jodi Doty, Bailey Richards, Thana Heller and John Wilkinson, the Bears topped Central (Neb.) Community College in the North Plains A District Softball Tournament, which earned the Bears a berth to the NJCAA DII Softball Championship for the eighth consecutive year and ninth time in Ligouri’s 10-year tenure. DMACC had one of the most prolific offenses in the country. The Bears topped the Division II charts with a .433 batting average, .498 on-base percentage, .712 slugging percentage, .635 runs, 728 hits, 1,197 total bases and 600 RBI. Their 102 long balls (2nd), 252 extra-base hits (2nd), 137 doubles (3rd) and 197 walks (8th) were all ranked top-10 in the country.

DMACC, a representative of the NFCA’s Midwest Region, was joined by Surry Community College (East) and Murray State College (South) as NJCAA DI Regional Coaching Staff of the Year recipients. The national coaching staff of the year award is voted on by NJCAA DII member head coaches. Ligouri and his staff will be honored at the NFCA Awards Brunch, Dec. 10 at the 2022 NFCA Convention in San Antonio.