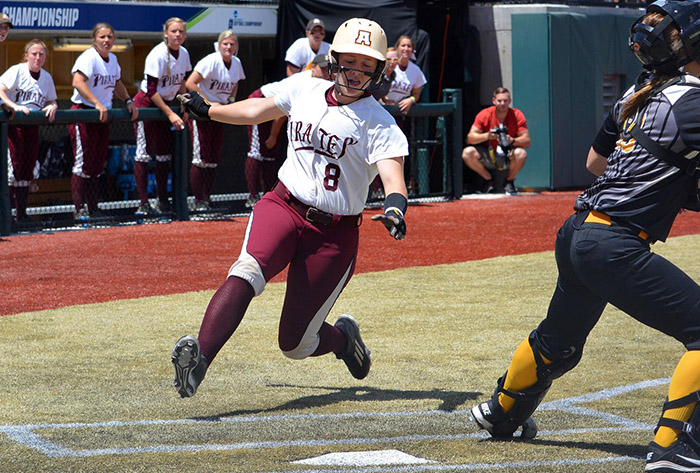 DENVER, Colo. – No. 3 North Alabama advanced the Championship Series, while No. 16 Armstrong and No. 5 Humboldt will face off tomorrow with the other series' spot on the line.

Jane Trzaska tossed a two-hit shutout and Armstrong scored the lone run of the game in the fifth to edge Adelphi, 1-0 in the first elimination game on day three. The victory advanced the Pirates to the semifinals, while Panthers’ (35-22) season comes to an end.

Trzaska kept the Panther bats at bay with five strikeouts in the first of two complete games on Thursday. Autumn Parrish knocked in the lone run, ripping an RBI single off the third baseman’s glove to plate Logan Harrell (pictured) with the game-winning run.

Lindsay Mapes (22-14) suffered another tough loss. She scattered seven hits, struck out two and walked for in a complete-game effort.

Southern Arkansas scored a pair of runs in both the first and second innings and went on to eliminate top-ranked West Texas A&M with a 7-4 victory and advance the semifinals against No. 3 North Alabama.

Kimmy Beasley put in a solid performance in the circle for the Muleriders to earn the win She went 5.1 innings, allowing four runs on six hits with five strikeouts. Reliever Peyton Jenkins entered with one away in the home-half of the sixth and ended the West Texas threat as she recorded five outs without giving up a hit en route to the save.

An RBI double by Goad and a run-scoring single from Ashton Atwell put the Muleriders up 2-0 in the first. They doubled their lead with a pair of RBI groundouts and inning later.

Goad left the yard to make it 5-0 in the fourth. After WT got on the board in the fifth, SAU added two in the sixth. The Lady Buffs (59-5) pushed across three runs in the bottom half of the sixth, but were unable to finish the rally.

Hardin paced the WT offensive, going 3-for-3 with a double and two RBI.

Armstrong State stayed alive and forced an if necessary game with a 3-2 come-from-behind victory over Humboldt State in the first semifinal.

The Jacks scored a run in the first and second innings to grab an early 2-0 lead. Breonna Bejaran put HSU on the board with a RBI single and Sydney Roberts made it 2-0 with a run-scoring single of her own.

The Pirates rallied with two runs in the bottom of the third on RBI singles from Michelle Breen and Peyton Roth.

Armstrong took the lead for good as pinch runner Emily Swafford scored from second on Jane Trzaska’s single and an error by the leftfielder.

Madison Williams (25-3) suffered the defeat in a complete-game outing. She surrendered nine hits, struck out one and did not walk a batter.

North Alabama advanced to the National Championship Series with a 10-2 win over Southern Arkansas in the second semifinal on Thursday evening.

After falling behind 1-0 in the second inning, the Lions scored three in the third and exploded for seven in the fourth to eliminate the Muleriders. SAU’s first trip to the National Championships comes to an end in the semifinals.

Harlie Barkley finished 2-for-3 with a triple, three RBI and two runs scored and Reagan Tittle was 2-for-2 with two RBI to pace UNA’s 10-hit attack. Hillary Carpenter picked up the win, allowing a pair of runs on four hits, with five punchouts, two walks and five hit batters.

After Tyler Casada gave SAU a 1-0 lead in the second, Courtney Shields tied the game and ignited the Lions' offense with a solo blast to center in the third. With two outs, Tittle roped a two-run single to put them up for good, 3-1.

The Muleriders got one run back on a solo long ball by Chelsea Jordan in the top of the fourth, but a seven spot, highlighted by a bases clearing three-run triple by Barkley, in the bottom half of the frame put the game away.