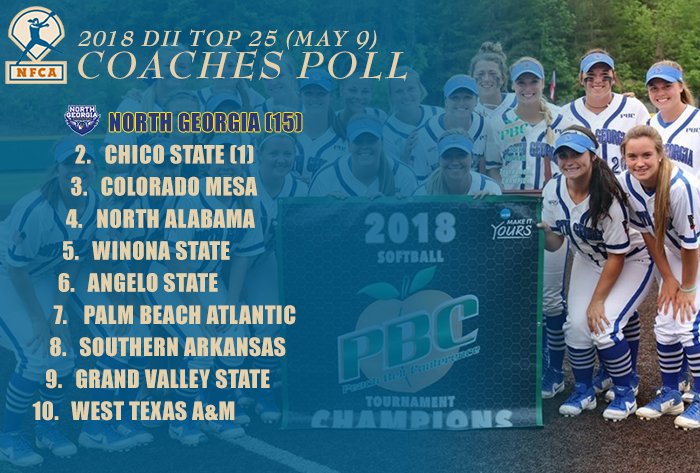 LOUISVILLE, Ky. – North Georgia continued as the No. 1 team for the third straight week in the 2018 NFCA Division II Top 25 Coaches Poll.  The NightHawks (56-2) swept through the Peach Belt Conference tournament and will be the No. 1 overall seed in the Southeast Region.

There was not much movement in the top ten as the first six spots remained the same. The only change saw Palm Beach Atlantic and Southern Arkansas switch at No. 7 and No. 8.

No. 2 Chico State, No. 3 Colorado Mesa, No. 4 North Alabama, No. 5 Winona State and No. 6 Angelo State and No. 9 Grand Valley State all collected their respective conference tournament titles without dropping a single game. Those programs, minus North Alabama, will be the No. 1 seeds in their regions.

The Lions (44-5), who shared the weather-shortened Gulf South tournament title, will be the No. 2 seed in the South Region as Palm Beach Atlantic earned the No. 1 spot heading into NCAA postseason play.

The second-ranked Wildcats (50-3), who are riding a 25-game winning streak, reached the 50-win plateau in their 50th season of softball and captured their first ever California Collegiate Athletic Association tournament. The No. 3 Mavericks (47-3) cruised to their second straight Rocky Mountain Athletic Conference tourney title, outscoring the opposition 31-2.

The fifth-ranked Warriors (45-5) are riding a 15-game winning streak following McKenna Larsen’s walk-off grand slam in the bottom of the seventh that lifted Winona State to an 8-5 win over No. 13 Augustana and its sixth Northern Sun Intercollegiate Athletic Conference tournament championship.

The Rambelles (47-7), the 2017 national runners-up, collected their second straight Lone Star Conference tournament title knocking off then-No. 15 Tarleton State in the semifinals and No. 10 West Texas A&M in the final.

Palm Beach Atlantic was idle and No. 8 Southern Arkansas reached the 50-win plateau but bowed out of the Great American Conference tournament.

Adelphi joins the poll for the first time this season at No. 24. The Panthers (30-19-1) knocked off Southern New Hampshire and Pace to become back-to-back Northeast-10 Conference champions. Adelphi will be the No. 1 seed in the East Region after a late season surge, winning 11 of its final 14 contests.

The 2018 NCAA Division II Softball Championships will open May 10-12 at 16 regional sites across the country. The super regionals are slated for May 17-18 and the finals will be held May 24-28 at the Moyer Sports’ Complex in Salem, Va.

The 2018 NFCA Division II Top 25 Poll is voted on by 16 NCAA Division II head coaches with two representing each of the eight NCAA regions. Records reflect games played through May 6, 2018.

The 2018 NFCA Division II Top 25 Coaches Poll is voted on by 16 NCAA Division II head coaches with two representing each of the eight NCAA regionals. Records reflect games played through May 6, 2018.