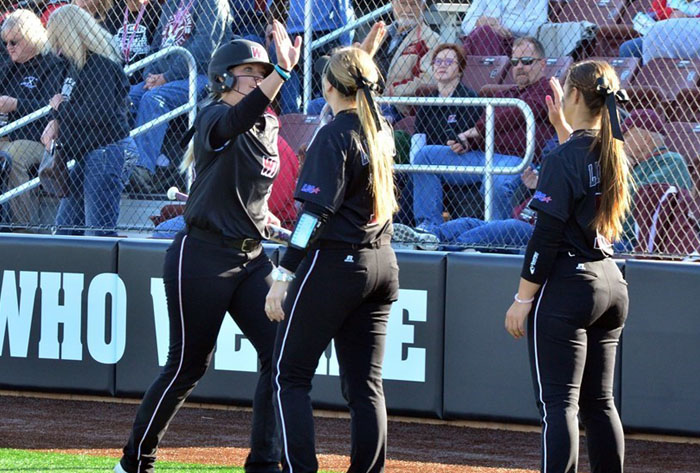 LOUISVILLE, Ky. – Sweeping through its first Lone Star Conference series, West Texas A&M tightened its grip on the No. 1 ranking in this week’s NFCA Division II Top 25 Coaches Poll, announced by the Association on Wednesday morning.

Indianapolis and University of Alabama in Huntsville switch spots as the Greyhound went undefeated at the Music City Invitational. Improving to 7-0, Indianapolis, which tallied one first-place vote, shut out Huntigton (3-0) and Hillsdale (2-0) before edging out Trevecca Nazarene and Ohio Dominican to remain undefeated. In the shutout of Hillsdale, senior Morgan Foley set the Division II seven-inning strikeout out record, setting down all 21 batters on her own in a no-hit effort. UAH went 2-1 in its Gulf South Conference road series at West Georgia. After splitting day one’s double dip (6-0 / 2-4), the Chargers (18-3) took the series with a 7-3 victory on Sunday.

Humboldt State remained at No. 4 following a four-game California Collegiate Athletic Association road sweep of Cal State San Marcos. Behind a solid performance in the circle, the Jacks raised their record to 13-1-1 by allowing just one run over the course of four contests and earning three shutouts.

University of Missouri-St. Louis dropped two positions to No. 7 after splitting a pair of games last week at the NTC Spring Games. The Tritons (11-1) opened with a 9-0 shutout of Notre Dame College before dropping their first contest of the season to then No. 16 West Virginia Wesleyan, 2-1 in eight innings.

West Chester’s 10-0 start has the Golden Rams in at No. 24, while Florida Tech dropped out of the rankings.

Dropped Out: No. 24 Florida Tech