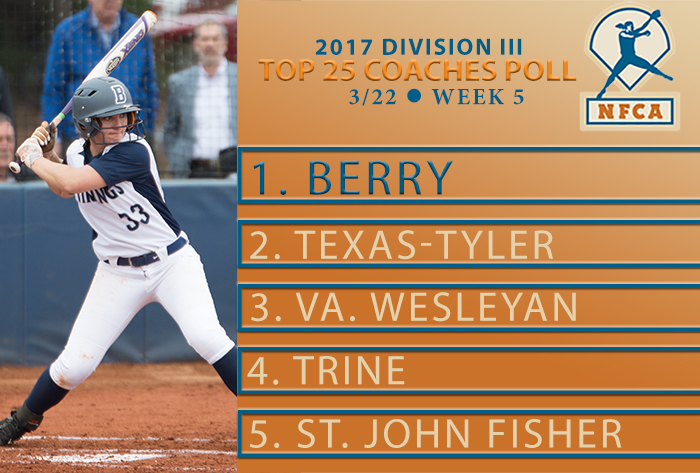 LOUISVILLE, Ky. — Berry College is the unanimous No. 1 team in the NFCA Top 25 softball rankings, strengthening its spot one week after earning its first top ranking in program history.

The (21-1) Vikings received all eight first-place votes this week after suffering their first loss — 2-1 at Claremont-Mudd-Scripps last Tuesday — but winning its other three games. Berry garnered seven votes last week, when it took the top spot from defending national champion Texas-Tyler (22-2), which had held the No. 1 position for five consecutive weeks and 15 of the last 17 polls.

The Patriots continue in the No. 2 spot following a three-game American Southwest Conference sweep of Howard Payne, while Virginia Wesleyan (19-1) — which received last week’s other first-place vote — remains third after two lopsided victories.

The new No. 4 team this week is Trine, which won 10 more games last week to improve to 16-0 and gain five places in the poll, while St. John Fisher (8-2) moves up three spots to fifth, just ahead of East Texas Baptist (18-4) in sixth.

The biggest jump this week is 20-2 Louisiana College’s seven places to No. 17, while Texas-Dallas (20-5) moves back into the Top 25 and Wisconsin-La Crosse (15-3) joins the poll at No. 24, where it is tied with Massachusetts Institute of Technology, which hopes to finally start its season on Saturday against the University of Chicago.

Dropped out: Manhattanville and Tufts.