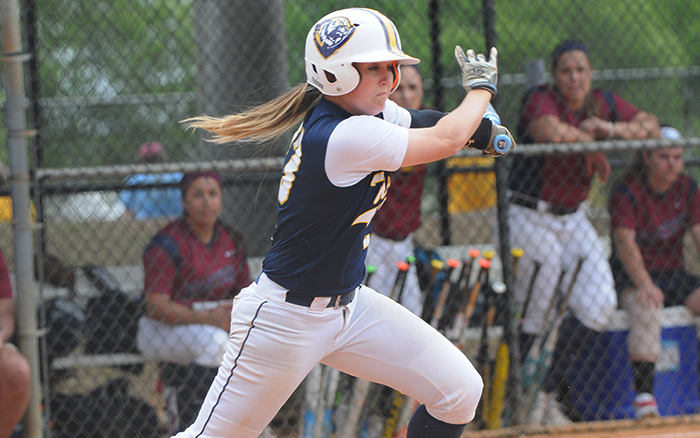 COLUMBUS, Ga. – Twelve teams reached the semifinals of their respective brackets with all four from the gold bracket improving to 4-0 on day two of the NFCA Division III Leadoff Classic, Saturday at the South Commons Softball Complex.

The top four seeds in the Gold Bracket, No. 1-ranked Texas-Tyler, No. 3 Christopher Newport, Trine and No. 6 Texas Lutheran, improved to 4-0 and advanced to the semifinals, which will start at 11 a.m. on Sunday. The first matchup will pit the Patriots and Captains, while the other will have the Thunder and Bulldogs doing battle. Top-seeded Texas-Tyler posted two more shutouts with an 11-0 triumph over SUNY Oneonta and a quarterfinal victory against No. 10 Berry. The shutouts extended the Patriots’ tournament scoreless streak to 26 innings.

CNU’s route to the semis came courtesy of a four-hit shutout by Maiven McKnight in a 3-0 win over Augustana followed by 8-3 win over No. 20 Lake Forest in which the Captains used a six-run, six-hit first and did not look back.

In the other half of the bracket, Trine finished off pool play with a 10-1 victory over Ithaca, before walking off with a thrilling 2-1 win over No. 8 Virginia Wesleyan. In the latter contest, neither team recorded a hit until the fifth inning and both teams traded single runs in the sixth. With one out in the seventh and the bases juiced, Kendra Marshall stroked a game-winning single to the fence in right center field.

Texas Lutheran rounds out the gold bracket, using big innings and strong pitching to advance. The Bulldogs received a pair of complete-game outings in the circle, as both pitchers surrendered just one run. In its final pool game, it pulled away late and clinched the game (9-1) with a five-run fifth against Piedmont and then used a four-run third in a 4-1 triumph over Claremont-Mudd-Scripps.

The silver bracket witnessed top-seed and No. 7-ranked East Texas Baptist, No. 2 seed and No. 23 Linfield, fifth seed St. Thomas and sixth-seeded Birmingham-Southern advance. The Tigers used a five-run third and three-run sixth to secure a spot in the semifinals with a 8-5 win over Augustana. Its next opponent, St. Thomas, rallied with a two-out, two-run, four-hit rally in the seventh to knock off No. 17 Central, 3-2. Linfield cruised to a 7-0 win over Western Connecticut State and Birmingham-Southern blanked Alma, 3-0.

In the bronze bracket, Ithaca, Piedmont, No. 13 Illinois Wesleyan and Eastern Connecticut State posted victories to advance to the final bracket’s semifinals.

Consolation games in all three brackets begin at 9 a.m. tomorrow morning, while all semifinal contests start at 11 a.m.