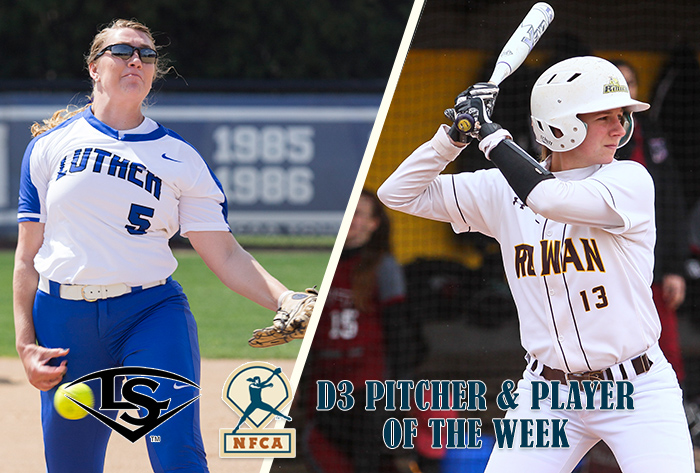 Junior right-hander Bratland went 4-0 last week to help lead the (35-8) Norse to their third-straight Iowa Intercollegiate Athletic Conference tournament title. In the conference tournament, the Spring Grove, Minn., native won three games, with a pair of five-hitters, and four innings of no-hit ball in the other. She allowed just one earned run over 17 tournament innings in the circle.

Last Tuesday, she pitched a three-hitter and had five strikeouts in Luther’s win over Central in the first game of its final conference doubleheader of the season, to give her just one earned run allowed in 24 innings for the week.

The Nutley High graduate hit a game-tying, two-run homer in the bottom of the seventh inning of the first NJAC title game on Sunday against College of New Jersey, which Rowan won in the eighth on Morgan Smith’s single down the left field line. In the winner-take-all second championship game, junior shortstop Anderson doubled and scored the game-winning run.

Both Luther and Rowan will host NCAA regionals starting Friday.

Washington (Mo.) University junior shortstop Taylor Arends batted .615 (8-for-13) with seven runs, a homer and six RBI, while hitting safely in all four games she played last week. … Rowan sophomore pitcher Jesse DeDomenico threw a no-hitter against Ramapo in the NJAC tournament, and compiled two complete games over five appearances and three starts, going 4-1 with a 0.78 ERA, two shutouts, 15 strikeouts and a .097 opponent batting average. She also helped herself at the plate, with five hits in 17 at-bats (.294), three runs and two RBI. … SUNY Geneseo sophomore pitcher Ashlyn Kersch earned SUNYAC tournament MVP honors after leading the Knights to their first conference title since 2002. She went 3-1 for the week, including three tournament victories, and allowed a total of two earned runs while fanning 15 over 19.2 innings in four appearances.