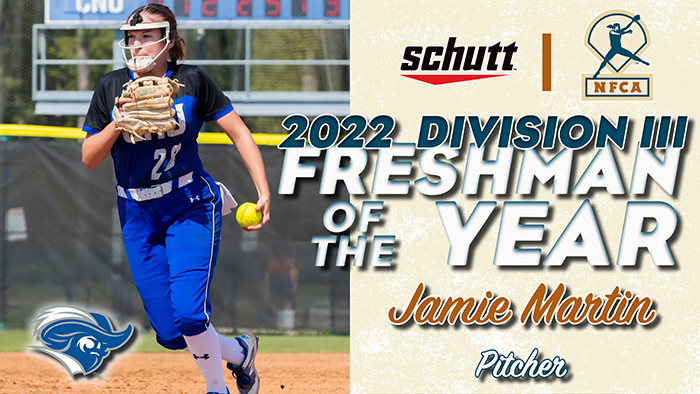 Martin, a left-handed pitcher from Lorton, Va., anchors a four-person staff that features three freshmen and a junior. She headed into today’s first NCAA championship finals matchup against Worcester Polytechnic Institute at 19-1 with a 0.95 ERA, six shutouts, one save, just 18 walks, 133 strikeouts and a ridiculous 7.4-to-1 strikeout-to-walk ratio over 125 innings in the circle.

Earlier this week, Martin was announced as a second-team NFCA Division III All-American. Previously, she was chosen by Region VI member coaches as one of three first-team NFCA All-Region pitchers, and was the top vote-getter in her position group.

A 2019 Virginia state 6A champion and Player of the Year at South County High, Martin has logged four wins so far in this year’s NCAA tournament. She struck out four over three innings in the Captains’ tournament opener against Wilson, then fanned 24 across 20 innings and three straight complete games against Messiah (twice) and Virginia Wesleyan (once) as they moved through the first game of the Super Regional round.

Martin also tossed the final inning of their nine-inning Super Regional-clinching victory over Virginia Wesleyan the following day as Christopher Newport advanced to the NCAA Division III Finals for the third time in school history, and first time since 2011. That was the second of two straight finals appearances, when the Captains finished national runner-up to Linfield.

She pitched a no-hitter on April 16 at Mary Washington, fanning 10 and walking none. Her other double-digit strikeout game of the season came March 6 against Claremont-Mudd-Scripps at the NFCA Division III Leadoff Classic, when she recorded 11 in a complete-game four-hitter.

The Schutt Sports/NFCA Division III National Freshman of the Year is selected by the NFCA Division III All-America Committee, which consists of a representative for each of the 10 NCAA regions.