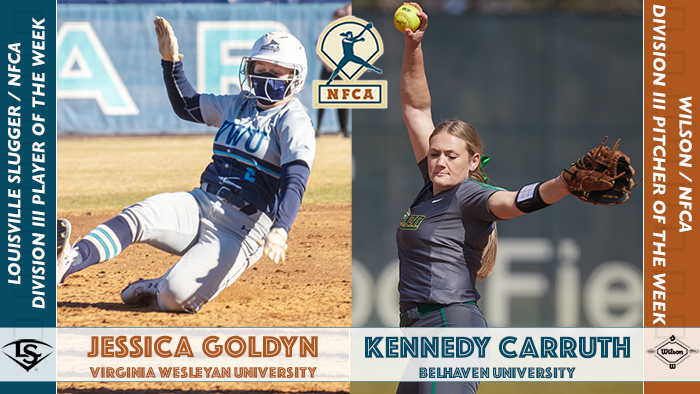 Carruth, a sophomore right-hander from St. Francisville, La., delivered Wilson/NFCA Pitcher of the Week recognition for the No. 11 Blazers after going 3-1 with 35 strikeouts, just 11 hits and five walks allowed over 18.1 innings in the circle. The Coastal Alabama South Community College transfer tied a school record with 14 strikeouts in a three-hitter against No. 9 Berry, and fanned 20 over 10.2 innings and two victories over Division I Jackson State — 12 strikeouts in a 9-8 win and eight in a five-inning one-hitter. Carruth also helped herself at the plate, going 5-for-15 (.333) with two doubles, two RBI and three walks.

Senior catcher Goldyn, meanwhile, shined starting at three positions in four games for the No. 2 Marlins, hitting .667 (8-for-12) with a double, two triples, five walks, six runs, six RBI and eight steals in eight attempts. The Ocean Lakes High product went 6-for-7 with three runs, a double, two triples, four steals and six RBI in a doubleheader sweep of Shenandoah. Against then-No. 22 Randolph-Macon, Virginia Wesleyan’s leadoff hitter reached base in five of eight plate appearances and scored three runs in a win and a tie due to darkness.

Birmingham-Southern freshman pitcher Hailee Bryan allowed just one hit over 8.2 innings, with one hit and no walks across two appearances. … St. Catherine junior shortstop Alex Ehde batted .600 (6-of-10) with four runs scored. … Alma sophomore first baseman Emma Fraser was so effective as the Scots’ leadoff hitter that she was walked intentionally three times in nine plate appearances against Anderson, and hit .667 (8-for-12) with three doubles, a homer, six runs and three RBI the rest of the weekend. … Stevens Institute of Technology freshman left fielder Jessica Guerrero collected seven RBI and multiple hits in three of four games, hitting .500 (7-for-14) with two doubles and a homer. …  Muskingum junior infielder Haley Hawk was 7-for-10 (.700) with two doubles, six RBI, and two walks, while playing flawless defense at first base. … St. Catherine junior first baseman Angela Huepfel had a walk, three RBI and batted .625. … Berry senior third baseman Bayleigh Masterson went 5-for-7 (.714) with two runs, a homer and four RBI against nationally-ranked Belhaven. … Birmingham-Southern freshman outfielder Morgan McGuire hit .538 with six runs, two doubles, a triple and four RBI. … College of New Jersey senior pitcher Alanna Namit had a five-inning, one-hitter with six strikeouts against Wesley. … College of New Jersey sophomore outfielder Kaci Neveling was 5-of-6 (.833) with three runs, two triples and three RBI. … Westminster (Pa.) sophomore catcher Leah Pancake had four multi-hit games and hit .455 with two doubles, a homer and 10 RBI. … Wisconsin-Eau Claire senior catcher Abbey Place had the game-tying RBI in the bottom of the seventh and two more RBI in the ninth to propel the Blugolds to a win over nationally-ranked St. Catherine. For the week, she hit .611 with three doubles, a homer and six RBI. … Moravian sophomore pitcher/utility player Alexandria Scheeler helped fuel a season-opening sweep of Gwynedd Mercy with a pair of five-inning wins. She fanned five in the first game and also performed at the plate with a .571 average, a double, four runs and four RBI for the two contests. … Alma junior pitcher Haley Ullrich delivered a two-hitter, a three-hitter and a save for the Scots, plus batted .375 with a pair of triples. … Salisbury sophomore pitcher Lindsey Windsor collected a career-high 12 strikeouts versus Wesley and combined on a two-hitter against Lynchburg the following day.