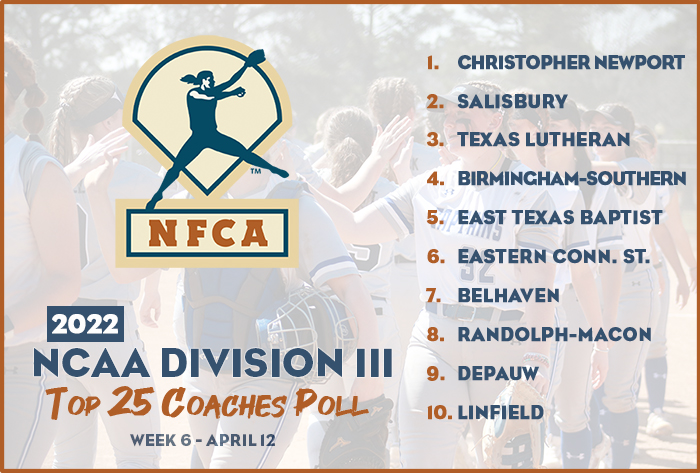 LOUISVILLE, Ky. — Christopher Newport kept rolling to remain the No. 1 team in the NFCA Division III Top 25 Coaches Poll for a fourth-straight week.

Christopher Newport (27-1) swept Meredith in its only action this past week. No. 2 Salisbury (28-2) kept pace with two victories of its own, while third-ranked Texas Lutheran (29-4) and No. 4 Birmingham-Southern (28-4) each swept a three-game conference series.

Meanwhile, East Texas Baptist (22-7) and Eastern Connecticut State (20-4) hopped over Belhaven and Randolph-Macon after those two both lost. DePauw (18-6) held steady at No. 9, while Linfield (29-7) took all four games of a conference series with Puget Sound to round out the first 10.

No. 11 Virginia Wesleyan (25-8) regained three spots this week after outscoring opponents 58-4 over six contests. The reigning national champion Marlins have now won eight of their last 10.

Elsewhere, Milwaukee School of Engineering (13-3) finally got some cooperative weather after returning north from its Florida trip, going 8-2 for the week. It was the first action for the Raiders since March 4.

Two teams that had a rough start to their season, but have a long program pedigree of success — Massachusetts Institute of Technology and Trine — now find themselves in the mix after getting things going.

The (15-8) Engineers are tied for the 24th spot with Millikin after splitting with a ranked win over Tufts and a sweep of both Emerson and Clark. After not playing for two years due to COVID-19, MIT has now won 14 of its last 15 games.

Trine (12-9) has won eight in a row, and 12 of its last 14, to start receiving votes again. The Thunder were forced to play without head coach Donnie Danklefsen in the early part of the season due to a family emergency.