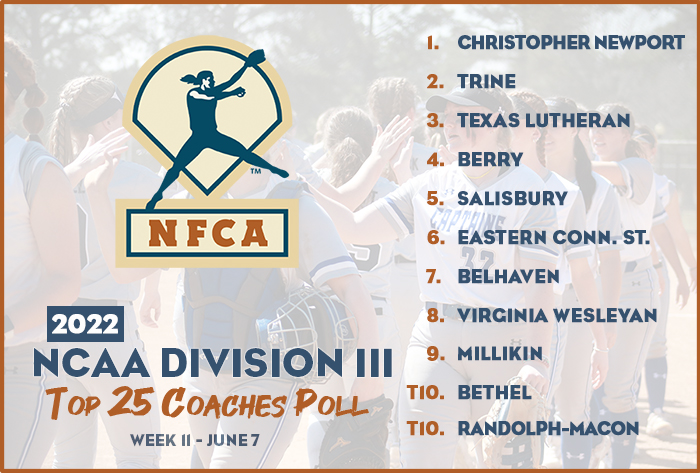 LOUISVILLE, Ky. — Fresh off its first softball national championship, Christopher Newport finishes the year where it spent most of 2022, as the No. 1 team in the NFCA Division III Top 25 Coaches Poll.

The (47-1) Captains were the top-ranked team in the country for the final nine weeks, and looked the part throughout, dropping just one contest all season, and winning their final 24 games. They averaged 8.6 runs per game while allowing just 84 runs all season.

Christopher Newport was a perfect 12-0 in the postseason without having to leave their home state, including beating fellow NCAA Finals participant Salisbury (42-8) in the Coast-to-Coast Conference Tournament and sweeping two hard-fought games from 2021 national champion and local rival Virginia Wesleyan in the Super Regionals. At the finals site in Salem, Va., the Captains were 5-0.

Meanwhile, a season that started with a family emergency and 0-7 record turned into one of the best feel-good stories of the year, with head coach Donnie Danklefsen’s Trine squad winning 20 of their final 22 games to finish second nationally. The (35-13) Thunder’s lone two losses over that stretch were the two games they lost to Christopher Newport in the best-of-three national championship series.

All eight national finals participants finished ranked in the top 12, with third-place finishers Texas Lutheran (45-6) and Berry (36-13), and fifth-place finishers Salisbury (42-8) and Eastern Connecticut State (44-7) occupying spots No. 3-6. Seventh-place finishers Millikin (37-9) and Worcester Polytechnic (35-17) returned to the rankings to close the year at ninth and 12th, respectively.