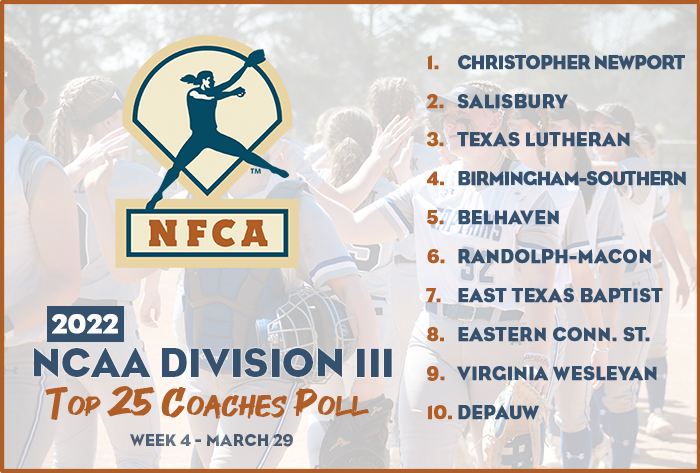 LOUISVILLE, Ky. — Christopher Newport’s win streak came to an end, but the Captains collected two more victories this week to remain in the No. 1 spot in the NFCA Division III Top 25 Coaches Poll.

Christopher Newport (23-1) defeated then-No. 3 Virginia Wesleyan, 6-1, last Wednesday, but lost the second game of a Sunday doubleheader with Averett, 8-5, after rolling past the Cougars, 10-0 in five innings, in the opener.

Salisbury (24-2) stayed strong at the second spot with a 4-0 week, which extended its win streak to 11. The Sea Gulls beat Cortland and Ursinus twice each, by a combined 46-3 margin. In the circle, Salisbury has a 1.12 team ERA for the season.

Meanwhile, Texas Lutheran (23-4) swept a three-game series at Southwestern to climb two places to No. 3, and Birmingham-Southern (21-4) followed up last Monday’s 6-4 victory over then-No. 4 Belhaven with two triumphs apiece over Wesleyan and Maryville to gain three spots.

Belhaven (20-3) lost twice, including being the second ranked victim of Mary Hardin-Baylor in as many weeks, but won the final two games of that conference series handily to seemingly get back on track.

Randolph-Macon (17-2) had the biggest jump of the week — five places to No. 6 — but had its nine-game win streak snapped in a twinbill split with fellow ranked squad Roanoke.

Defending national champion Virginia Wesleyan (17-6) lost twice at Ferrum after falling to the top-ranked Captains, and have their lowest ranking — ninth — since being ranked 10th on Feb. 25, 2020.