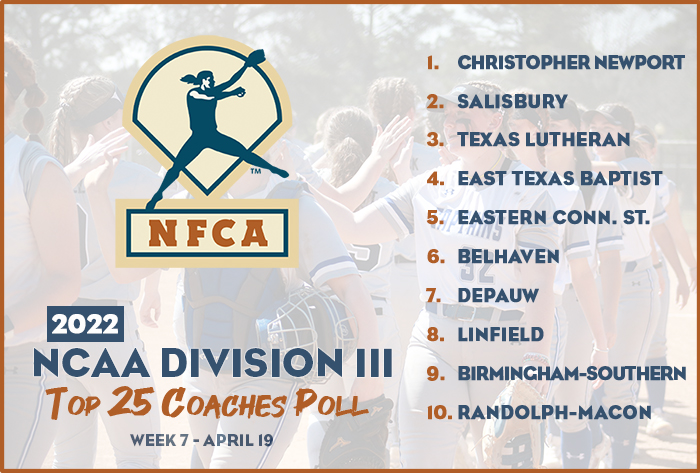 No. 1 Christopher Newport (31-1) swept both William Peace and Mary Washington, while second-ranked Salisbury (30-2) beat Catholic twice for its 50th straight win at home. The two, who are also 1-2 in the Coast-to-Coast Conference standings, will square off Wednesday in a doubleheader at Captains Park in Newport News, Va.

Birmingham-Southern (29-6) dropped from fourth to No. 9 after losing two of three to Berry, who was ranked 20th at the time. The (25-11) Vikings moved up seven places in the Top 25 after the series, with the Southern Athletic Association Tournament starting on Friday for both schools.

The College of New Jersey (20-5) moved into a tie with Babson (24-6) for 24th place after a split with No. 16 Rowan (24-6) last Tuesday. Piedmont (22-9), which has lost just once since the NFCA Division III Leadoff Classic in the beginning of March, returns to the receiving-votes category this week after sweeps of Brevard and Covenant.