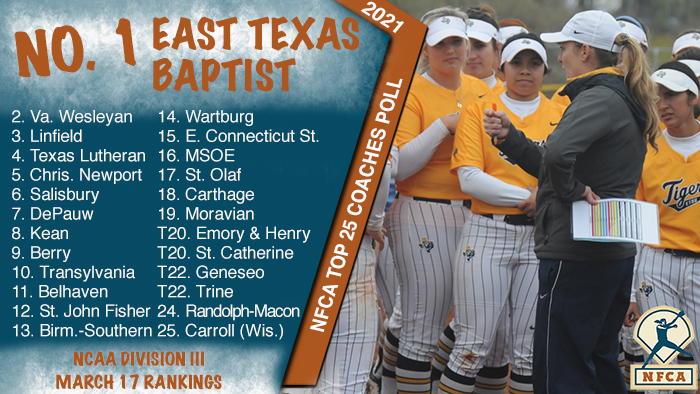 The (10-0) Tigers scored 20 runs in a home doubleheader sweep of Southwestern, which included Ashley Croft’s five-inning, one-hitter in the nightcap. They have scored less than six runs in a game only once this season.

Meanwhile, both Virginia Wesleyan (13-1-1) and Linfield (11-1) leapfrogged reigning national champion Texas Lutheran (9-4) into the second and third spots, respectively, in the rankings. The Bulldogs split a twinbill Tuesday with NAIA’s Houston-Victoria after ballots had been cast, and were 4-1 against Concordia (split) and Southwestern (three victories) last week.

Virginia Wesleyan plays a doubleheader at No. 5 Christopher Newport (13-5) today after winning three games and tying another due to darkness since last week. The Marlins swept the Captains in the longtime rivals’ first meeting on Feb. 27. Linfield continued to take care of business, winning four straight against Whitworth over the weekend, and are on a nine-game win streak.

A bevy of ranked games loom at Transylvania this weekend, as the 10th-ranked squad in the country hosts No. 7 DePauw (10-0), No. 22 Trine (0-0) and receiving-votes Illinois Wesleyan (2-0). The Pioneers are slated to face DePauw in a doubleheader on Friday, then again in a single contest on Sunday, plus Wittenberg and Illinois Wesleyan on Saturday and Trine in its other game on Sunday.

Other Top 25 games on the calendar include No. 16 Milwaukee School of Engineering and 18th-ranked Carthage opening against each other on Thursday, and ninth-ranked Berry playing a three-game series at No. 13 Birmingham-Southern this weekend.

The biggest move in the rankings came from Belhaven (13-4), which only joined the Top 25 last week. The Blazers have won five of their last six to climb 14 spots in seven days, from No. 25 to 11. Belhaven scored 21 runs in three victories over Division I Jackson State, and split a doubleheader with No. 9 Berry last week. Including last season, the Blazers have now captured 21 of their last 25.