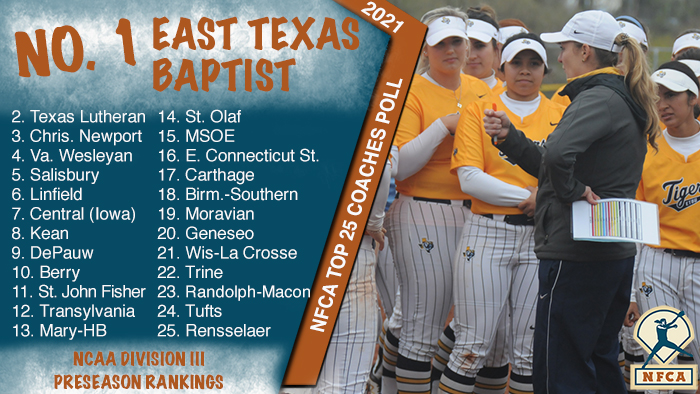 The Tigers were able to play one final game in 2020 after going 4-0 to capture the NFCA Division III Leadoff Classic in Tucson, Ariz., defeating Baldwin Wallace, 7-1, on March 10, two days before the NCAA announced it was canceling all spring championships.

The Bulldogs, who start second in the rankings, spent the last two weeks of 2020 in that spot, and were 19-1 when the season was halted. Christopher Newport, Virginia Wesleyan and Salisbury round out the top five, followed by Linfield, NFCA Division III Leadoff runner-up Central, Kean, DePauw and Berry.

Illinois Wesleyan, who was 9-1 and finished fourth in the Top 25 last season, suffered significant graduation losses, including 2019 Schutt Sports/NFCA Division III Pitcher of the Year Ally Wiegand, so the Titans open 2021 in the receiving votes category.

The NFCA Division III Top 25 Poll is selected by eight NCAA Division III head coaches representing the eight NCAA regions. Final 2020 records are listed, with first-place votes in parentheses. In 2021, schools that are not competing will not be eligible for the poll.