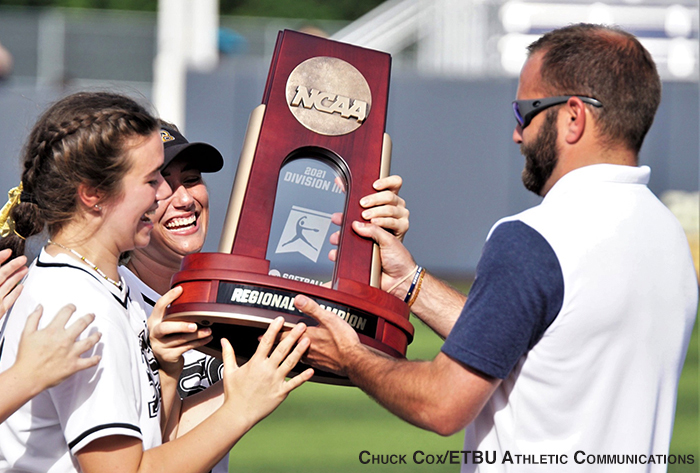 The eight teams advancing to the 2021 NCAA Division III Championship punched their tickets by winning their respective regionals over the weekend.

The teams in the final eight account for six of the last seven Division III titles, and eight crowns overall, including 2019 national champion Texas Lutheran, two-time titlist Virginia Wesleyan (2017 and 2018) and Tufts, which won three-straight crowns from 2013-15.

All but one swept their way to the May 27-June 1 finals at Moyer Park in Salem, Va.

DePauw (38-3), the No. 1-ranked team in the NFCA Top 25, rebounded from a rare loss to become the first team to advance, with a 9-2 victory over receiving votes Mount St. Joseph on Saturday in the Decatur (Ill.) Regional. Skyler Barnett hit a two-run homer in the top of the first, and the Tigers added three runs in the fourth, including Grace Smith’s RBI single, to put the game out of reach. The win avenged a 9-1 defeat to the Lions earlier in the day that snapped DePauw’s 21-game win streak.

The other seven squads closed out their regionals on Sunday.

Reigning national champion and No. 2-ranked (tie) Texas Lutheran (32-4) had little trouble at home navigating its regional, rolling past No. 15 Emory & Henry, 10-2 in five innings, in the championship game. After spotting Cedar Crest a 2-0 lead in their opener, the Bulldogs scored 21 straight runs, and then never trailed in their final three contests. Winning pitcher Skylar Ouelette’s two-run double and Sarah Metzer’s three-run homer highlighted a seven-run first in the second of two victories over Emory & Henry.

Two-time national champion Virginia Wesleyan (41-5-1), who headed into the NCAAs tied with Texas Lutheran for second in the NFCA Top 25, went 4-0 in its regional with a 6-5 victory over 10th-ranked The College of New Jersey less than 24 hours after Karlee Fretz’s two-run walk-off hit in the bottom of the eighth beat the Lions, 4-3, on Saturday. Fretz had another two-RBI single in Sunday’s clincher and Jessica Goldyn had two hits, including a homer.

NFCA Hall of Famer John Tschida will lead two-time national champ St. Thomas (32-8) to its seventh championship site appearance before returning to coach his alma mater, St. Mary’s, which he led to the 2000 Division III title, when No. 20 (tie) St. Thomas goes Division I next year. Kendall Hopkins and Kirstin Anderson-Glass combined on a 3-0 three-hit shutout of St. Olaf in Sunday’s final, the duo carrying a no-hitter into the fifth. Tschida, who guided the Tommies to back-to-back national championships 2004 and 2005, won his 800th game at St. Thomas in Saturday’s 8-1 winner’s bracket triumph over Coe, and won his 1,000th career game earlier this month in a conference doubleheader against St. Benedict.

Three-time national champion Tufts (21-5) will return to the NCAA finals for the first time since wrapping up a third-straight title in 2015 at Moyer Park. Sophia DiCocco tossed a one-hit shutout and Reegan Coleman doubled and scored the game’s lone run on a passed ball with one out in the bottom of the seventh. The Jumbos won three of their four regional games in the seventh inning.

Fifth-ranked Birmingham-Southern (31-6) earned its first trip to the NCAA finals with a 3-1 victory over host and No. 7-ranked East Texas Baptist. Hailee Bryan limited the Tigers’ offense to five hits and Saydee Keith singled in and also scored a run for the Panthers.

Fourteenth-ranked Rochester (35-8) will make its second trip to the NCAA finals, and first since 2014, after beating No. 16 St. John Fisher for the fourth time this season, and second time in two days, 3-1 on Sunday. The Yellowjackets scored twice in the bottom of the second after St. John Fisher had taken a 1-0 edge on Rachel Evans’ home run in the top half of the frame. Alexis Pope had a sacrifice fly and Madi Turner singled in the other Rochester run in the inning. The Yellowjackets won Saturday’s winner’s bracket game and split a doubleheader between the two schools back on April 28.

Wisconsin-Oshkosh (28-11), which received votes in last week’s NFCA poll, beat Piedmont, 6-1, on Sunday and defeated its four regional opponents by a combined 20-3 margin. Maddie Fink, who tossed two shutouts on Saturday, saw her scoreless streak end at 21.2 innings, but did not allow an earned run for the third-straight start, and retired five of her final six batters on Sunday.