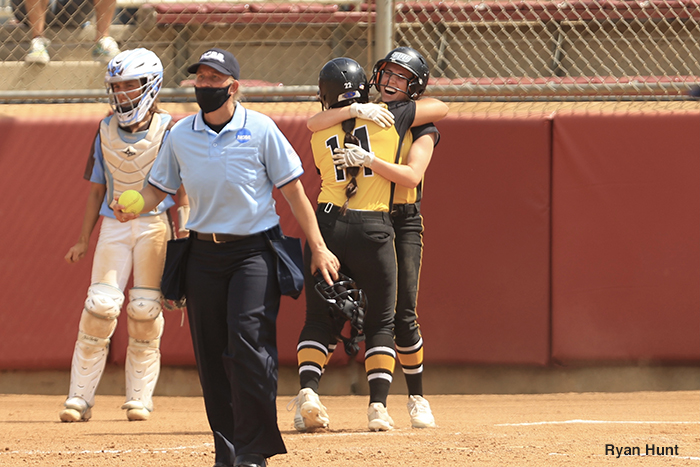 SALEM, Va. — Leah Wood hit a home run to lead off the bottom of the ninth inning, giving third-seeded Birmingham-Southern a 3-2 victory over No. 6 seed Rochester to close the first day of the NCAA Division III championship finals on Thursday at the Moyer Sports Complex.

Hunter Gilbreath had two hits in the loss for Rochester (35-9), which plays a noon game against seventh-seeded St. Thomas (32-9), with the losing team ousted from the double-elimination event.

Rebecca Snow singled home fellow All-American Kelly Jurden with the winning run in the bottom of the seventh, and the defending national champion and fourth-seeded (33-4) Bulldogs scored three of their four runs in their final turn at-bat in a come-from-behind victory over No. 5 seed Tufts (21-6). Texas Lutheran plays No. 1 seed DePauw (39-3) in a 3 p.m. Friday winner’s bracket contest.

Michelle Adelman hit a two-run homer in the third inning for the Jumbos, who open Friday’s play with a 10 a.m. elimination game against No. 8 seed Wisconsin-Oshkosh.

Womack had a two-run single in the bottom of the sixth and later scored on a throwing error, as the Marlins broke a scoreless tie in a matchup of former back-to-back national champions. NCAA Division III all-time wins leader and four-time All-American Hanna Hull allowed two hits and fanned six in a complete-game effort, despite taking a line drive off her throwing hand early in the contest.

Kierstin Anderson-Glass scattered nine hits and struck out five in the loss for the Tommies.

Jade Meija Wick doubled in the go-ahead run in a two-run fifth, and the Tigers erased an early 1-0 deficit in the opening game of the eight-team finals. All-American Cami Henry allowed just three hits and improved to 23-0 for the season.

Gabby Buikema had an RBI single in the top of the first and Maddie Fink limited DePauw to four hits over six innings for the (28-12) Titans.

Friday's game times were moved up an hour due to rain in the forecast.