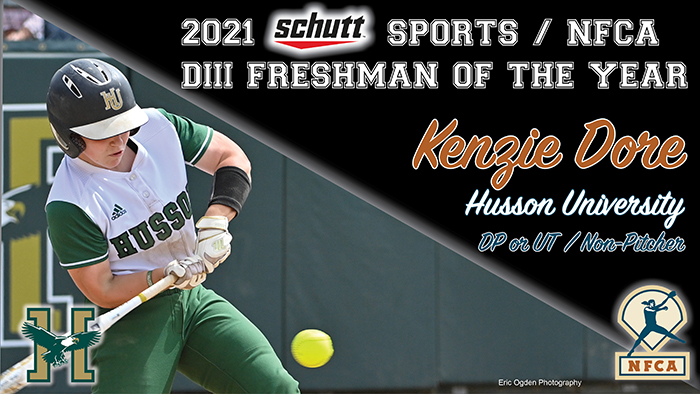 Dore, an infielder from Holden, Maine, continues her season of firsts for the Eagles by becoming the first Husson player to receive the Freshman of the Year honor. Earlier this week, she was the first Eagle voted an NFCA All-American, following her selection by coaches in the New England Region as the program’s first first-team All-Region player.

She had 13 multi-hit games and 10 multi-RBI contests this season for the Eagles, who went 29-3 and were the top seed and host for an NCAA Regional last weekend, falling just one win short of advancing to the eight-team NCAA Championship finals in Salem, Va. Her signature offensive performance came in an April 10 victory over Northern Vermont-Lyndon, when she was 3-for-3 with a double, triple, homer, three runs scored and six RBI.

The Brewer High graduate, who may have been destined to be an Eagle after being born in Bangor, Maine, just miles from the Husson campus, is also a top-15 finalist for the Schutt Sports/NFCA Division III National Player of the Year, which will be revealed on June 3. Dore is the lone freshman in that elite group, joining two graduate students, three seniors, six juniors and three sophomores.

She was selected as the 2021 North Atlantic Conference Rookie of the Year after playing a variety of roles for the Eagles this season, including third base, shortstop and designated player. In high school, Dore was twice a finalist for Maine’s Gatorade Player of the Year award, the Kennebec Valley Athletic Conference Class B Player of the Year her junior season, as well as a two-time all-state player and two-time state softball champion.

The Schutt Sports/NFCA Division III National Freshman of the Year is selected by the NFCA Division III All-America Committee. No award was presented last year, due to the COVID-19 pandemic.