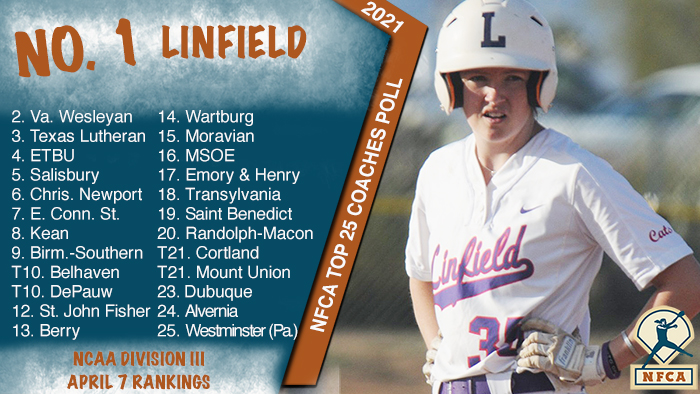 LOUISVILLE, Ky. — Linfield saw its 18-game win streak end, but maintained its standing as the top team in the country for a third week in the NFCA Division III Top 25 Coaches Poll.

The (22-2) Wildcats dropped the second game of a four-game weekend series with Puget Sound, but won the final two games to quickly get back on track. Meanwhile, No. 2 Virginia Wesleyan (21-3-1) also lost — to then-No. 22 Randolph-Macon — but rebounded to sweep Ferrum on Saturday and Bridgewater (Va.). on Tuesday.

There was no such stumble from reigning national champion Texas Lutheran (16-3), which took two from Trinity (Texas) and four from Schreiner to remain firmly entrenched in third, while East Texas Baptist (16-3) won three against Texas-Dallas to move up to fourth, and Salisbury (14-4) rolled to a pair of wins over Division II Bowie State to ascend to fifth.

Christopher Newport (18-8) slipped to sixth off a split with the same Bridgewater team Virginia Wesleyan swept, before also splitting with William Peace on Tuesday, with a sweep of Lynchburg in between.

Eastern Connecticut (14-0) was one of two biggest movers this week, surging five spots to seventh after winning four straight against UMass-Dartmouth. The Warriors, who were 2-0 before COVID-19 halted the 2020 season, have won 27 of their last 29, and haven’t lost since May 26, 2019, when they fell 3-2 in an eight-inning heartbreaker to eventual national runner-up Emory at the NCAA Championship finals in Tyler, Texas.

Saint Benedict (10-2) is the other big gainer this week, also moving up five places, to 19th, after a pair of wins. Transylvania (13-7), just above the Bennies at No. 18, dropped five spots after a week that included a split with Franklin.

Elsewhere, unbeaten Westminster (Pa.) joined the poll at No. 25 after continuing its winning ways, which included a sweep of Washington & Jefferson on Tuesday to get to 18-0.

Dropped out: Aurora, Geneseo and Luther.