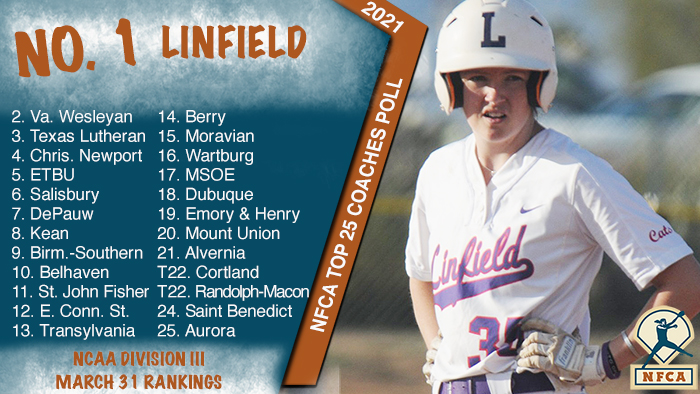 LOUISVILLE, Ky. — Linfield kept rolling with a four-game series sweep of Pacific Lutheran over the weekend, which extended its win streak to 17 games and maintained its grip on the top spot in the NFCA Division III Top 25 Coaches Poll.

The (19-1) Wildcats had a pair of gems from pitchers Maddy Podnar (four-hitter, five strikeouts) and Tayah Kelley (two-hitter, eight strikeouts) in the first two games on Saturday, before Pacific Lutheran joined the hit parade in two one-run victories for Linfield on Sunday.

Meanwhile, East Texas Baptist (13-3), which dropped out of the No. 1 spot last week, lost two of three against McMurry to fall from a tie for second with Virginia Wesleyan to fifth. Ashley Croft’s six-strikeout, one-hitter in the second game against McMurry was bookended by a pair of 4-2 losses. The Tigers will look to get back on track tomorrow with a home doubleheader against Texas-Dallas.

Virginia Wesleyan (17-3-1), meanwhile, split a ranked matchup with Randolph-Macon to remain No. 2. Hanna Hull fanned eight over five innings, as the Marlins rolled 8-0 in game one, before the (4-3-1) Yellow Jackets rebounded to take the nightcap, 5-4.

Texas Lutheran (16-4) and Christopher Newport (14-6) each moved up a spot, to fourth and fifth, respectively, as a result of the East Texas Baptist losses. The Bulldogs are riding an eight-game win streak, which includes seven wins over the last week, while the Captains were idle due to poor weather in Virginia.