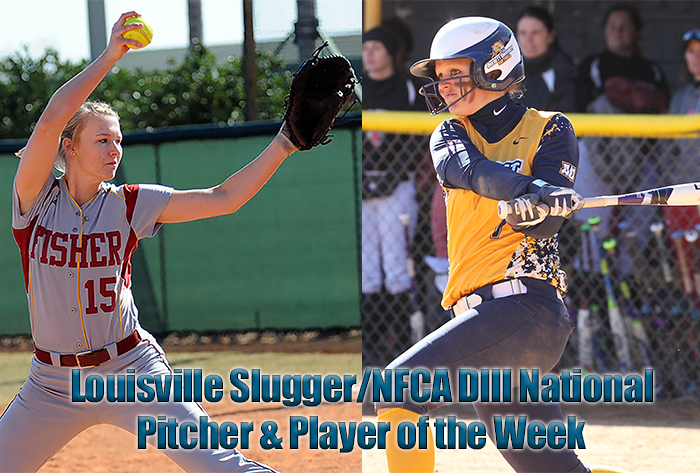 Long, a junior shortstop from Prospect Hill, N.C., batted .696 with 16 hits, including four doubles and a triple, as the (7-8) Cougars won four of six games this past week to emerge from a daunting start that featured seven of their first nine games against ranked opponents. The Bartlett Yancey High product also scored 10 runs and was 7-for-7 on steal attempts, while playing flawless defense.

Meanwhile, sophomore right-hander Thayer helped fuel a 9-1 start by the Cardinals by going 5-0 with 73 strikeouts and just two walks over 35 innings. The St. Lawrence High graduate allowed only four unearned runs for the week, while tossing two seven-inning two-hitters (combined 35 strikeouts), a three-hitter (10Ks), a four-hitter (14Ks) and a five-hitter (14Ks).

DeSales sophomore right-hander Andrea Artesani struck out nine over eight innings, with five hits, one unearned run and one walk in a season-opening win over Centenary. … Immaculata sophomore shortstop Annemarie Bartow batted .333 (7-for-21) with five runs, five doubles, two homers and 10 runs batted in. She went 4-for-5 with three runs, three doubles, a homer and six RBI against Finlandia in her team’s lone win of the week. … Texas-Tyler senior right-hander Kelsie Batten went 2-0 for the week, with 16 strikeouts, eight hits and two earned runs allowed over 10.2 innings, while recording her 90th career win and holding opponents to a .205 average. … Belhaven junior right-hander Julienne Broussard went 2-0 for the week in three games (two starts), allowing six hits and two walks, while fanning 18, allowing no earned runs and limiting the opposition to a .154 average. … Penn State Berks senior outfielder Jenna Heffner went 2-for-4 (.500) with four runs, a double, homer, three walks and five RBI in a pair of victories. … Virginia Wesleyan sophomore first baseman Cassetty Howerin hit .545 (6-for-11) with six runs, a double, two homers and nine RBI, plus three walks. She hit two homers and drove in seven runs in a 13-0 rout of Buffalo State. … Guilford sophomore righty Courtney Lackey tossed a six-inning three-hitter (five strikeouts) and 5.2 innings of relief (one run, five strikeouts) in a 2-0 week individually, while helping herself at the plate with the game-winning RBI in the seventh inning of a game against Averett. … Franklin junior outfielder Megan Lalioff was 12-for-21 (.571) with eight runs, two doubles, a triple and six RBI. … Otterbein sophomore utility player Bailey McElwain batted .462 (6-for-13) with six runs, two triples, a homer and seven RBI in a 4-0 week that capped a 10-0 spring break for the Cardinals. … Neumann freshman right-hander Taylor Naman won her first collegiate game, scattering nine hits and two earned runs, while collecting five strikeouts. … Otterbein sophomore righty Rachael Owens went 3-0 for the week to improve to 6-0 for the team’s spring break, compiling an 1.64 ERA and collecting nine strikeouts over 11 innings and three appearances (two starts). She helped herself at the plate with a .455 average (5-for-11), two runs, two doubles, two steals and six RBI over four games. … Hood sophomore right-hander Kayli Paugh tossed a six-hitter with one walk and nine strikeouts and hit a two-run homer in a conference win over Stevenson. … Washington (Mo.) senior righty Annie Pitkin was 3-0 with 32 strikeouts, no walks and allowed no runs over 15.2 innings, while limiting opponents to a .080 average. She tossed her second career perfect game (and fourth no-hitter) in a 10-0 rout of Bethany, during which she fanned 14 of 15 batters over the five innings. Pitkin allowed one hit and struck out nine in a five-inning victory over Haverford and got the win in relief in a 5-4 eight-inning triumph over Susquehanna. ... Texas-Tyler senior infielder Raven Rodriguez was 6-for-11 (.545) with five runs, a double, homer and four RBI in a three-game sweep of Mary Hardin-Baylor. … Penn State Berks freshman righty Jessica Rozick tossed a three-hitter (one walk, 12 strikeouts) in her collegiate debut against Mt. Aloysius. … Hood junior outfielder Roo Saglimbeni hit .750 (6-for-8) with three runs, a double, two homers and seven RBI. She went 4-for-4 with two homers and 10 total bases in a five-inning triumph over Stevenson. … Manhattanville sophomore outfielder Alexis Ventarola was 3-for-5 (.600) as the Valiants opened the season with a pair of wins. She collected three runs, a double, triple and two RBI. … Belhaven senior catcher Carly Yasses batted .636 (7-for-11) with seven runs, a double, three homers and seven RBI in a 5-0 week for her school. In the field, she made 29 putouts and had one assist and zero errors.