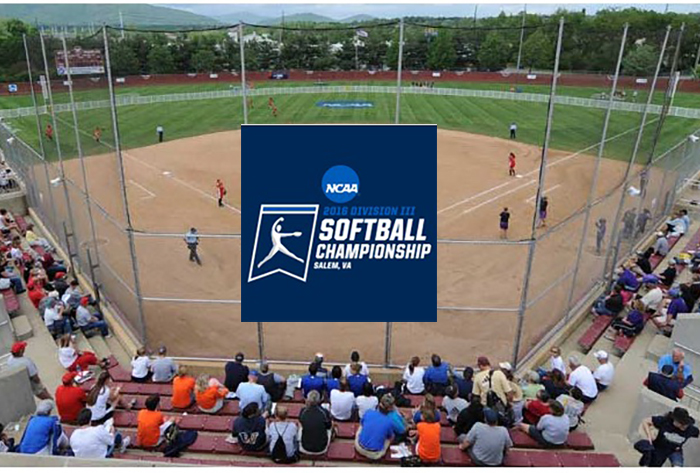 SALEM, Va. — 2009 national champion Messiah rolled to a run-shortened victory Saturday night to become the first team to reach the best-of-three championship series at the 2016 NCAA Division III Finals at the James I. Moyer Sports Complex.

The (47-4) Falcons get a day off as they await the winner of Sunday’s extra bracket game at 10 a.m. between 2015 national runner-up Texas-Tyler and St. John Fisher — the third meeting of those two squads this week.

Meanwhile, Emory and Massachusetts Institute of Technology were eliminated earlier on Saturday to drop the eight original teams to just three.

Erin Cressman and Brooke Pompeo homered and the Falcons played great defense behind — and including — NFCA All-American Courtney Allen to oust the (41-11) Profs and assure themselves at least a national runner-up finish.

Allen allowed four hits and one run over the first 4.1 innings, benefitting from two outstanding catches in center field by Amber Bingaman. Allen herself promptly made an over-the-shoulder diving catch in center field after Madelyn Yannetti took over in the circle and Bingaman slid over to right field.

Amanda Jones had three hits, including a triple, and Cressman drove in four runs for Messiah.

Four players had one hit apiece in the loss for Rowan.

Two-time All-American Lindsey Thayer tossed her second shutout of the day, limiting the powerful (46-5) Patriots to just three hits while fanning seven to give her 21 strikeouts for her two games Saturday. In all, Thayer made 215 pitches (150 for strikes) over 14 innings, allowing two runs and four hits.

Batterymate Karlie Neale led off the top of the seventh with a homer to left center to snap a scoreless tie.

Sophomore Thayer struck out 14 in an one-hit gem to reach 750 for her Cardinal career in just her second season.

Neale had two hits, while Lauren Owens doubled in Sarah Kubik in the fourth for the game’s lone run.

Katherine Shade provided the only hit for the (34-14) Engineers with one out in the fifth and Lexi Marshall fanned four and allowed five hits in the loss.

MacKenzie Juodaitis won her second game of the week and Allison Nolan collected her save, as the Profs set a school record for wins in a season (41) by eliminating Emory.

Ashley Powers doubled twice among her three hits, Alyssa Pollard added two hits and Janelle Turnquest drove in two in the loss for the (46-8) Eagles.