No. 1 Texas-Tyler stymies the competition on its way to 2016 NFCA DIII Leadoff Classic title 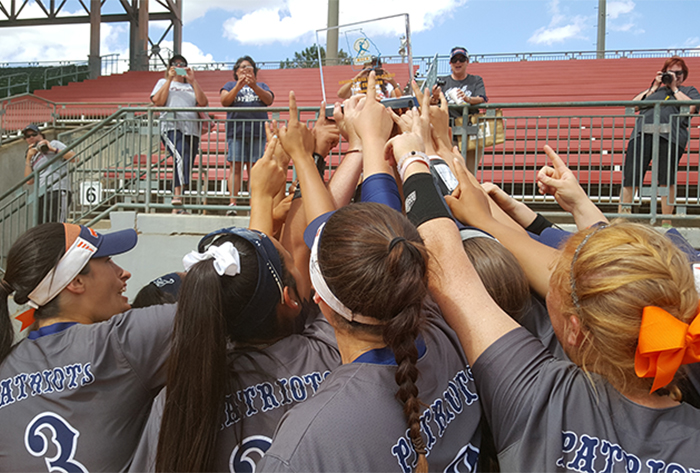 COLUMBUS, Ga. – Top-ranked Texas-Tyler blanked the competition over 38 innings as it took home the 2016 NFCA Division III Leadoff Classic title in style. The Patriots (17-2) capped off their impressive showing by defeating Trine in the gold bracket title game, 5-0, which was preceded by a five-inning victory over No. 3-ranked Christopher Newport on Sunday at the South Commons Softball Complex.

The Patriots outscored the competition, 41-0 over six games and extended its shutout streak to eight games and 49 innings. In the semifinal, Texas-Tyler launched three home runs and Kelsie Batten surrendered three hits and struck out two in an 8-0 victory over the Captains. Two more long balls and a five-hit shutout lifted the Patriots to the championship. Jade Green and Vanessa Carrizales catapulted UT-Tyler to a 3-0 lead with a solo and two-run home run, respectively. Both long balls came after Trine had two shots to get on the scoreboard. However, the Thunder (9-5) stranded a runner at third in the first and the bases loaded in the second. That was all Alaina Kissinger would need as she scattered five hits, struck out four and did not walk a batter.

Trine won five straight to get to the final. The Thunder (9-5) capped off a 4-2 showing by topping No. 6 Texas Lutheran, 7-2, ending the Bulldogs’ 14-game undefeated streak to start the season.

In the consolation of the gold bracket, Claremont-Mudd-Scripps defeated No. 8 Virginia Wesleyan and No. 10 Berry to put forth a 4-2 outing.

No. 7 East Texas Baptist won the silver bracket with a thrilling 5-4 victory over Birmingham-Southern. The Tigers trailed 4-3 with two outs and a runner on second in the bottom of the seventh. Following a walk and game-tying double, a liner deflected off the pitcher's glove, allowing the game-winning run to score. The Panthers used a little last-inning magic to reach the final, as they hit a game-tying home run and pushed across the winning run in the top of the seventh to rally past No. 23 Linfield, 8-7, in the semifinals. ETBU earned its finals appearance after an 8-2 win over St. Thomas.

No. 22 Alma edged No 17 Central, 4-3 in the consolation final of the silver bracket. Prior to their matchup, the Scots topped Western Connecticut, 8-0, in five innings and the Dutch defeated Augustana 9-5.

No 13 Illinois Wesleyan trumped Ithaca, 6-3 in the bronze final. The Titans closed the tournament with three straight wins, which included an 8-2 victory over Eastern Connecticut State in the morning, while the Bombers concluded the weekend 3-3, including a 3-1 triumph over Piedmont in their first contest on Sunday. In the consolation final, No. 24 Kean blanked Methodist, 3-0, and also picked up its first win of the tournament prior to that by topping Fontbonne, 9-5. Methodist defeated SUNY Oneonta, 2-1, in eight innings for its first win of the weekend.