No changes for first five in NFCA Division III Top 25 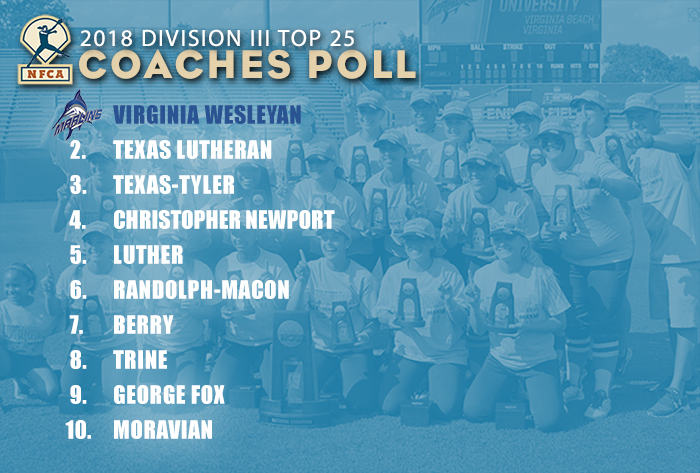 The (28-0) Marlins swept Guilford in a pair of run-rule shortened games on Sunday, and are unbeaten in their last 34 games, but figure to have a much-tougher test later today, when they travel to No. 4 Christopher Newport. The (21-3) Captains have won 12 straight, including their last eight at home.

Second-ranked Texas Lutheran (27-1) was idle this past week, but starts its final run of conference games with a pair of doubleheaders against Southwestern on Friday and Saturday. No. 3 Texas-Tyler, meanwhile, swept rival East Texas Baptist in a three-game conference series to improve to 26-1 and extend its win streak to 19 games. Fifth-ranked Luther (22-2) had won 17 straight before its one-run loss in Monday’s split with Wisconsin-River Falls indoors.

No. 20 Emory (17-7) worked its way back into the Top 25 on the strength of a 10-game win streak, and Saint Mary’s of Indiana (24-2) has won nine straight to debut at No. 25, while North Central, Rensselaer Polytechnic Institute, Buena Vista, Geneseo and Worcester Polytechnic Institute are this week’s newcomers in the receiving votes category.