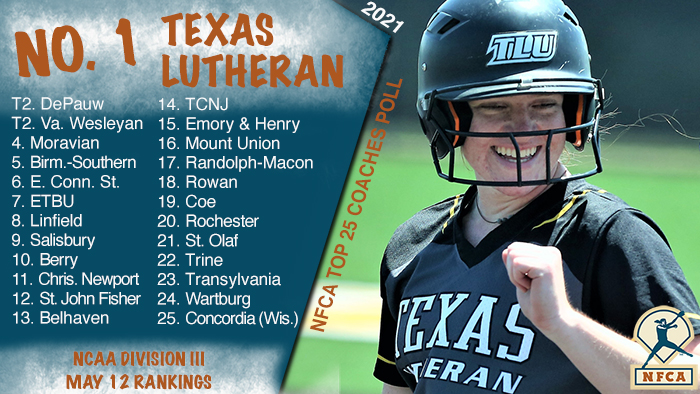 The (28-4) Bulldogs have won 20 straight games heading into the tournament, and are 47-5 since defeating Emory for its first Division III crown in 2019. The bracket will be revealed this coming Monday (May 17) at 1 p.m. ET on NCAA.com.

Unbeaten Moravian (28-0) highlights an unchanged next three teams, running its win streak to 32 games after eliminating Susquehanna in the Landmark Conference tournament. The Greyhounds play Scranton for the conference title on Saturday.

East Texas Baptist (30-5) benefited twice from Belhaven’s surprising early exit from the American Southwest Conference tournament. First, it cleared the path for the Tigers’ second straight conference crown, and it also allowed them to move up the seventh in the Top 25.

The NFCA Division III Top 25 Poll is selected by eight NCAA Division III head coaches representing the eight NCAA regions. Current records are listed, with first-place votes in parentheses. In 2021, schools that are not competing are not eligible for the poll.

There will be one more weekly ranking next Wednesday, then a final Top 25 following the completion of the NCAA tournament.