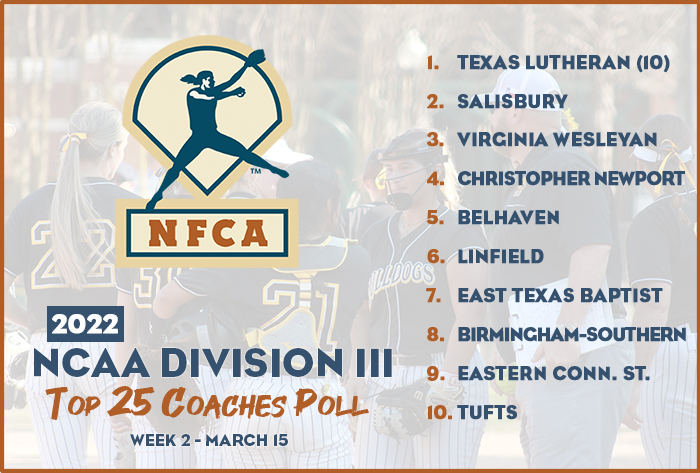 LOUISVILLE, Ky. — Texas Lutheran ran its win streak to 10 games to keep its hold on the No. 1 spot in the NFCA Division III Top 25 Coaches Poll.

The (16-3) Bulldogs swept LeTourneau on Monday, and head an unchanged top three, which includes No. 2 Salisbury (14-2) and No. 3 Virginia Wesleyan (13-3). While Salisbury was idle this past week, the defending national champion Marlins took two games apiece from Juniata and Muhlenberg to run their win streak to six straight.

Meanwhile, NFCA Leadoff Classic champion Christopher Newport (15-0) outscored Juniata 24-0 in a doubleheader sweep to continue its surge up the rankings — five more spots this week to No. 4. The Captains have allowed just two runs over their last eight contests, while scoring 97.

Leadoff Classic runner-up Belhaven (14-1) is following a similar path, gaining three more places to fifth, and running its win streak to 13 with a sweep of Howard Payne on Monday. The Blazers’ lone loss remains an 8-0 defeat to No. 7 East Texas Baptist in the middle game of a three-game American Southwest Conference series to open the 2022 season.