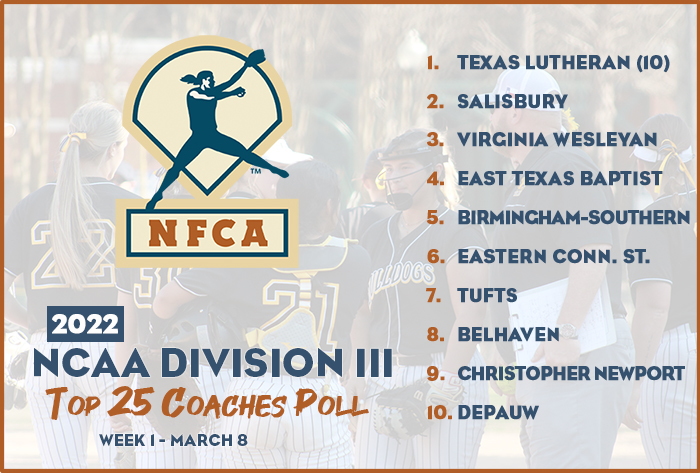 The (9-3) Bulldogs, beat two ranked teams and two squads receiving votes at the power-packed Leadoff at the South Commons Complex in Columbus, Ga. Texas Lutheran’s lone loss was a 13-9 slugfest against then-No. 1 DePauw.

Reigning national champion Virginia Wesleyan (9-3) slips one spot to third after a solid 5-1 showing at the Leadoff, followed by East Texas Baptist (13-5), Birmingham-Southern (9-3), Eastern Connecticut State (4-2) and Tufts (0-0) in an unchanged 4-7.

Leadoff runner-up Belhaven (12-1) is next at No. 8 after going a perfect 6-0 at the Leadoff, followed by unbeaten Leadoff champion Christopher Newport (9-0) in ninth. DePauw (5-5) rounds out the first 10 teams.

Linfield (11-2), which outscored its six Leadoff opponents 55-17, climbed nine spots in this week’s ranking, but lost 1-0 to unranked Transylvania in its tournament finale to keep them out of the top 10.

Elsewhere, No. 15 Rochester (1-5) remains highly-regarded despite its record, as four of its five losses have been to No. 2 Salisbury. And Trine (0-6) held on to a Top 25 spot after going winless at the Leadoff against five ranked opponents while playing five of its six games without head coach Donnie Danklefsen, who had to fly home for a family emergency.