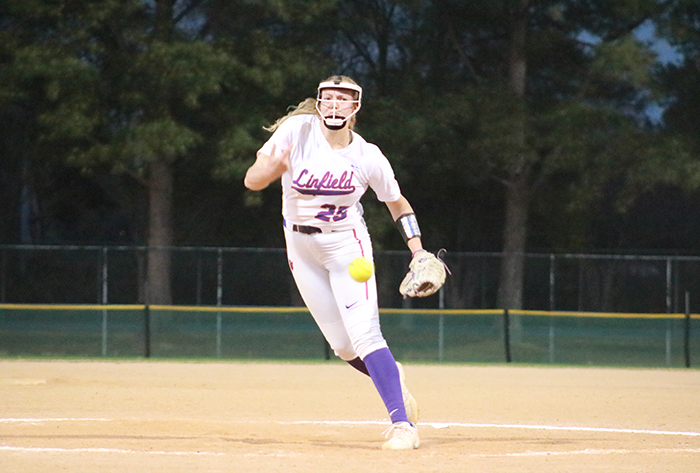 COLUMBUS, Ga. – Belhaven, Christopher Newport and Linfield head into the final day of the 2022 NFCA Division III Leadoff Classic with perfect 4-0 marks. The trio combined for 77 runs on the second-straight beautiful day at the South Commons Softball Complex.

After a pair of close wins on Friday, No. 18 Belhaven’s bats came alive on day two. The Blazers registered 23 runs and 25 hits in wins over Berry, 12-7, and MIT, 11-2 in six innings. Allie Gordon homered, scored four runs and registered six RBI in the two wins.

After a pair of close wins on Friday, No. 18 Belhaven’s bats came alive on day two. The Blazers registered 23 runs and 25 hits in wins over Berry, 12-7, and MIT, 11-2 in six innings. Allie Gordon homered, scored four runs and registered six RBI in the two wins.

No. 19 Christopher Newport exploded for 34 runs on 29 hits in triumphs over Alma and RV Emory. The Captains sent 15 batters to the plate in an 11-run fifth to roll past the Scots, 17-0. Against the Eagles, CNU was powered by a nine-run fourth and totaled 17 hits in a 17-9 six-inning win.

No. 20 Linfield toppled RV Coe, 7-1, and Illinois Wesleyan, 12-2 in five innings. Tayah Kelley shut down the Kohawks, surrendering a run on two hits with 14 punchouts. Against the Titans, the Wildcats scored five runs in the first and third innings and recorded 10 hits.

Also enjoying 2-0 showings on Saturday were No. 4 East Texas Baptist, Randolph Macon, No. 6 Eastern Connecticut State and No. 8 Salisbury.

The Tigers bounced back from a tough opening day with a pair of close wins over Trine and No. 2 Virginia Wesleyan. Tristan Maddox’s walk-off single in the ninth and an 11 K, complete-game effort by Hannah Kelley to lift ETBU to a 3-2 win over the Thunder. In a top-five matchup, the Tigers scored four in the sixth to break a scoreless deadlock and top the Marlins 5-2.

RMC defeated No. 15 St. John Fisher, 7-3 and No. 14 Piedmont, 7-0. Against the Cardinals, the Yellow Jackets broke a 3-3 deadlock with a four-run fifth and held on for the victory. In the nightcap, Gracie Ellis twirled a three-hit shutout as RMC picked up its second-straight win over a nationally-ranked opponent. Ellis fanned 15 and walked just one. She struck out the first six batters of the game.

Eastern Connecticut State scored three runs in the second and three more in the third in a 10-4 triumph over Illinois Wesleyan. Carly Stokers homered for the Warriors. In the nightcap, ECSU rallied from an early 5-2 deficit with four unanswered runs in a 6-5 victory over Claremont-Mudd-Scripps. The game-winner came with one out in the sixth on Stoker’s RBI double down the left field line.

Salisbury picked up a pair of two-run victories over No. 14 Piedmont and Central. After knocking off the Lions, 4-2, the Sea Gulls rallied from a 3-0 first-inning hole by scoring seven straight and holding on for a 7-5 win. Salisbury matched the Dutch’s three-run first inning with three of its own in the second. They broke the tie in the sixth scoring on a two-run throwing error during a double steal and tacked on two more in the seventh on Lindsey Windsor’s two-run shot in the seventh. Central scored two in the bottom half of the seventh and loaded the bases, but a pair of strikeouts ended the rally.

Action begins at 9 a.m. tomorrow with one more 24-game slate.