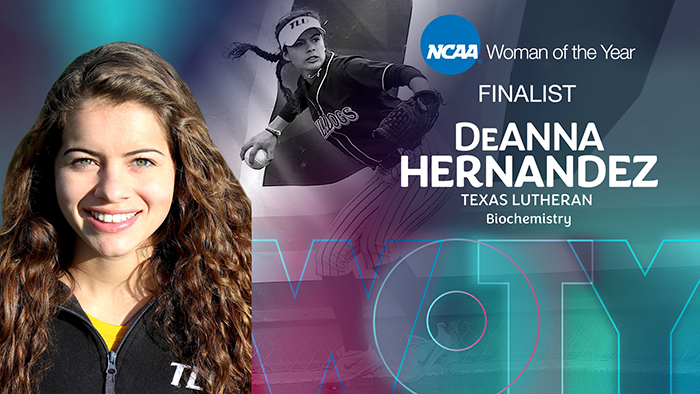 Texas Lutheran softball's DeAnna Hernandez is one of nine national finalists for the NCAA Woman of the Year Award. Hernandez, an outfielder and a member of the Bulldogs' 2019 NCAA DIII National Championship, is a May 2020 graduate of TLU. She completed her bachelor's degree in biochemistry with a perfect 4.0 grade point average.

"I am so blessed to be nominated for this award and to be in the running with some of the most outstanding female student-athletes in the NCAA," said Hernandez. "I would like to thank my family and all of the amazing coaches and teammates who have been alongside me during this journey. I am beyond grateful to be nominated for this prestigious award."

Hernandez, a native of Sugar Land, Texas, is the third student-athlete from the Southern Collegiate Athletic Conference to advance to the Top 9 for NCAA Woman of the Year. Hernandez joins Trinity's Christyn Schumann and Hayley Emerick as Top 9 finalists. Schumann advanced to the Top 9 in 2006, and Emerick was a Top 9 finalist in 2011. She is first TLU student-athlete to reach the Top 30 and Top 9.

The nine finalists, three women from each NCAA division, were selected for their outstanding achievements in academics, athletics, community service and leadership.

Finalists were chosen from the Top 30 Woman of the Year honorees, who represent 10 honorees from each division and 14 sports, including two emerging sports. In 2020, schools nominated 605 graduating female student-athletes for this prestigious award.

The finalists and Top 30 honorees will be celebrated and the 2020 NCAA Woman of the Year will be announced during a virtual awards show on Friday, Nov. 13. The show will be streamed on the NCAA Twitter account and ncaa.org/woty

, and it will be also streamed by ESPN.

In addition to her SCAC Woman of the Year and TLU Female Scholar-Athlete of the Year honors, Hernandez previously was named the 2019 Elite 90 Award Winner for NCAA Division III Softball at the national championship finals banquet. The Elite 90 award is presented to the student-athlete with the highest cumulative grade point average at each of the NCAA's 90 national championships. In 2020, Hernandez was named the SCAC's Elite 19 Award Winner for Softball.

"We are extremely excited for DeAnna," said TLU head coach Wade Wilson. "She is very deserving, and she has represented Texas Lutheran University with class and pride. She has been a selfless teammate and tremendous student-athlete. She had an incredible career both on the field and in the classroom."

Away from the softball diamond, Hernandez was a four-time member of the SCAC Spring Academic Honor Roll, and she made the TLU President's List in all eight of her collegiate semesters.

Hernandez was a TLU Chemistry Grant award recipient in 2019, and she was the secretary of the TLU Black & Gold President's Council for the 2019-20 academic year. She also served on the TLU Campus Activity Board, as a TLU Peer Mentor, as an organic chemistry research assistant, and as secretary and president of the TLU Pre-Health Professions Club.

"I will forever be thankful for the opportunities TLU has given me," said Hernandez. "To the coaches who have pushed me to be better, to the teammates who have become my family, and to the professors who allowed me to succeed, you will always be a part of me, and for that I thank you."