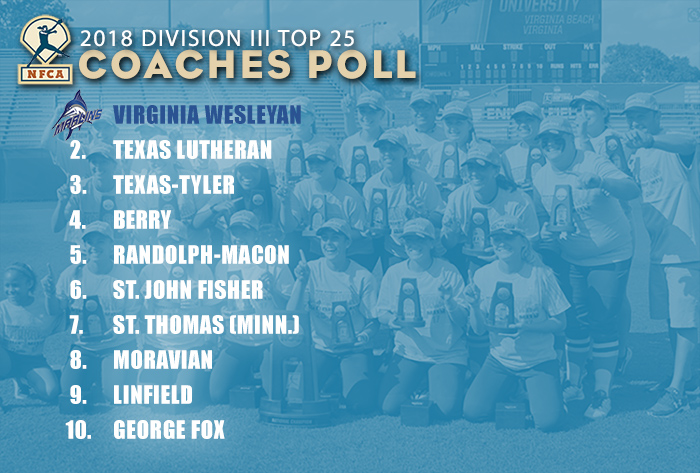 This week, the top seven teams are unchanged, and the first 11 teams are unanimous in the poll.

The (45-2) Marlins are the No. 1 team heading into the NCAA tournament for a second-straight season and have won 51 of their last 53 games. This is their 19th consecutive week as the unanimous choice atop the rankings. Virginia Wesleyan opens NCAA play on Friday against Gettysburg (24-14) in one of 14 four-team regionals that also features No. 11 Christopher Newport (35-8), the host school, and 2009 NCAA champion Messiah (27-16).

Like Virginia Wesleyan, No. 2 Texas Lutheran (37-1) was idle this past week, after wrapping up its fifth-straight Southern Collegiate Athletic Conference title two weeks ago. It takes a 30-game win streak into NCAA play later this week. Third-ranked Texas-Tyler (38-1), meanwhile, won its 31st-consecutive game Sunday against No. 15 East Texas Baptist to capture its third American Southwest Conference tournament crown in the last five seasons. Those teams comprise a three-team, all-Texas NCAA regional starting Friday.

Fourth-ranked Berry (36-4), which hasn’t played since wrapping up a fourth-straight Southern Athletic Association tournament title with a 10-1, five-inning triumph over Rhodes on April 21, starts its NCAA run Friday against Lynchburg (30-12) at Emory. No. 5 Randolph-Macon (38-5), off since being edged 6-5 in eight innings by Virginia Wesleyan in the Old Dominion Athletic Conference tournament, travels to New Jersey to face Staten Island (23-10) in its NCAA regional opener, hosted at No. 14 Rowan.

St. John Fisher (30-7) and St. Thomas (35-6) both captured their conference tournaments to remain sixth and seventh this week, respectively, while Moravian (32-5) beat Scranton twice to claim the Landmark Conference crown and jump three places to No. 8, ahead of idle Northwest Conference champion Linfield (35-8) and runner-up George Fox (35-9) in the top 10.

The NFCA Division III Top 25 Poll is selected by eight NCAA Division III head coaches representing the eight NCAA regions. Current 2018 records are listed, with first-place votes in parentheses. This is the last poll until after the NCAA tournament concludes.