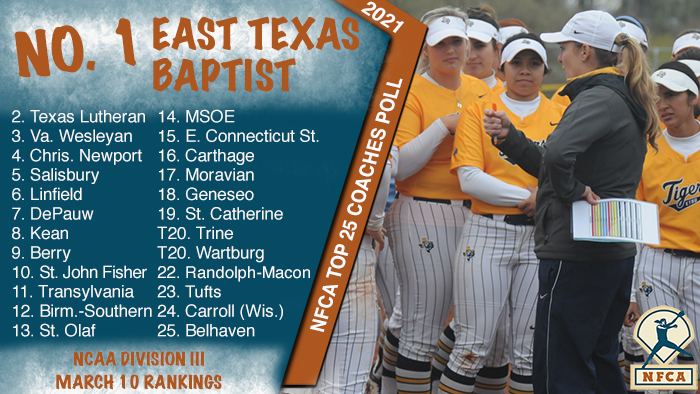 The (8-0) Tigers were a perfect 15-0 a year ago when COVID-19 halted the season — spending the final two weeks of 2020 at No. 1 and opening this season in that same spot. After scoring 47 runs over its last four games, East Texas Baptist is idle until next Tuesday, when it hosts Southwestern for a doubleheader.

Meanwhile, reigning NCAA champion Texas Lutheran (4-2) remains No. 2, with both its losses coming to Division II schools — St. Mary’s (Texas) and St. Edward’s. The Bulldogs have lost just three times in their last 32 games — and only four times in their last 46 contests — which includes their run to the 2019 Division III crown.

Virginia Wesleyan (10-1), which won the two NCAA titles before that, hopped over regional rival Christopher Newport (9-3) into third place following a home sweep of the Captains on Feb. 27. The Marlins’ lone loss this season is a 5-3 loss to No. 5 Salisbury in the teams’ third meeting this past Sunday.

Elsewhere, ninth-ranked Berry (8-1) will put its six-game win streak on the line Saturday when it faces No. 25 Belhaven (11-3) — a newcomer to the poll — which is coming off a doubleheader sweep of Division I Jackson State on Tuesday. The Blazers have a third game against the Tigers this afternoon.

No. 11 Transylvania (7-0) will play Christopher Newport twice this weekend, while 22nd-ranked Randolph-Macon is slated to open its season on Thursday against Virginia Wesleyan in another matchup of ranked squads.