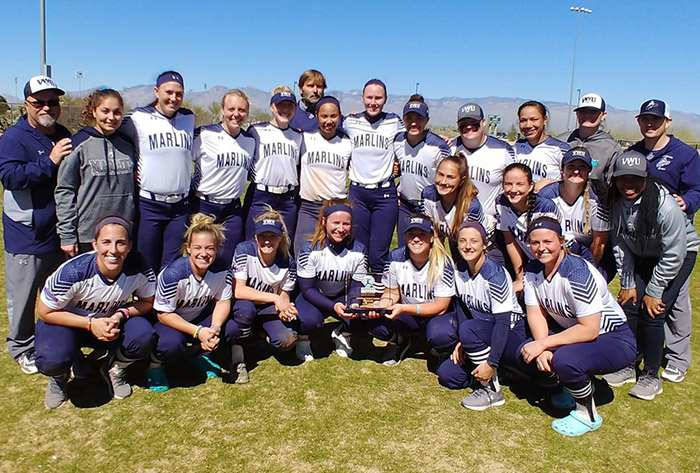 The top-ranked and undefeated (14-0) Marlins went 6-0 for the three days, and dealt Texas Lutheran its first loss of the season, 5-0, in both teams’ final tournament game. Earlier on Sunday, Virginia Wesleyan rallied back from a 6-1 deficit to defeat Rochester, 14-6, in five innings.

The (7-1) Bulldogs, meanwhile, rolled past Babson, 14-4, in five innings in their first game Sunday.

Amy Large had a single and drove in two runs, and Kiersten Richardson added two hits and two runs for the Marlins in the matchup of unbeaten teams. Reigning Schutt Sports/NFCA Division III National Player and Freshman of the Year Hanna Hull struck out nine in the two-hit shutout.

Kelsie McEachern and Kelly Jurden (double) had Texas Lutheran’s two hits, while the duo of Kassie Maddox and Jordaine Bishop limited the defending national champions to six hits in the contest.

Elsewhere, Claremont-Mudd-Scripps, one of six teams that went 5-1 at the tournament, claimed the Leadoff Classic’s second-place trophy on the strength of its run differential (max eight runs per game) over its six games. The (10-4) Athenas defeated both Pacific (Ore.) and Fontbonne on the final day. Another of those tied teams, Trine, lost one of its two games Sunday after entering the day as one of three unbeaten squads.

The tournament featured 32 elite teams playing a combined 96 games over three days, including most games involving at least one nationally-ranked team. There were 27 matchups where both teams were ranked. For a complete listing of tournament results, please visit our NFCA.org Tournament Central HERE.