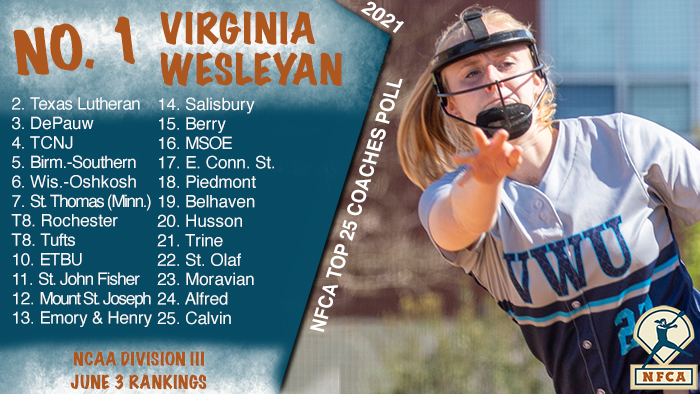 LOUISVILLE, Ky. — After winning its third NCAA Division III national championship in four tournaments, Virginia Wesleyan is the No. 1 team in the final NFCA Division III Top 25 of the 2021 season.

The (46-6-1) Marlins, who won back-to-back crowns in 2017 and 2018, defeated 2019 titlist Texas Lutheran (36-6) in the best-of-three NCAA championship series earlier this week at the Moyer Sports Complex. Virginia Wesleyan took the opening game, 4-2, on Monday, before the Bulldogs rebounded to win Tuesday’s game two, 3-2, and force a winner-take-all third contest, which the Marlins won, 9-1, in five innings later that afternoon.

The two finalists had been tied for second behind DePauw — which tied for third at the NCAA finals — in the most-recent Top 25 ranking on May 19. Both squads defeated the No. 1-ranked and top-seeded (40-5) Tigers on their 3-0 paths to the championship series. Virginia Wesleyan and Texas Lutheran’s lone losses in 27 combined postseason games this spring were to each other.

The eight teams that won their regionals to advance to the NCAA finals in Salem, Va., are all ranked in the final eight, with seventh-place finishers Rochester (35-10) and Tufts (21-7) tied for the No. 8 spot. DePauw ranks just below the finalists in third, while fellow third-place finisher Birmingham-Southern (33-8) is No. 5, and fifth-place finishers Wisconsin-Oshkosh (29-13) and St. Thomas (33-10) are sixth and seventh, respectively.

The College of New Jersey (26-5) is the only non-regional winner in the first nine, finishing in the No. 4 spot after losing a pair of one-run games — one in extra innings — to Virginia Wesleyan in the regional round.

The NFCA Division III Top 25 Poll is selected by eight NCAA Division III head coaches representing the eight NCAA regions. Final 2021 records are listed, with first-place votes in parentheses. In 2021, schools that did not compete were not eligible for the poll.  This is the final Top 25 ranking of the 2021 season.

Programs that didn’t participate during the 2021 season were not eligible for the poll.