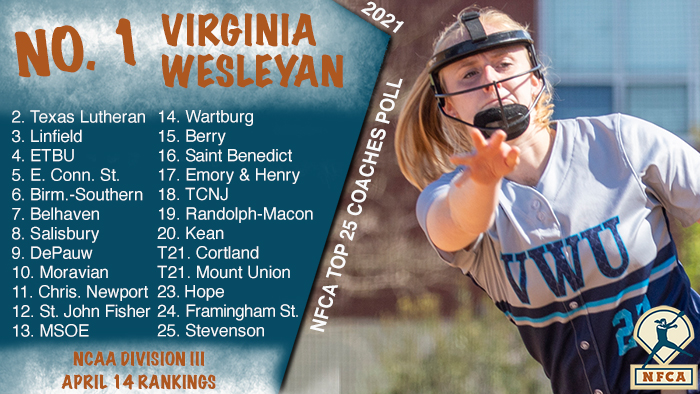 LOUISVILLE, Ky. — Virginia Wesleyan kept rolling to take over the top spot in the NFCA Division III Top 25 Coaches Poll for the first time since 2019.

The (23-3-1) Marlins scored a pair of one-run victories over Bridgewater (Va.) to reclaim the No. 1 ranking they last held on May 8, 2019. The current Virginia Wesleyan squad is riding a four-game win streak and has won eight of its last nine contests. All three of Marlins’ losses — and their tie — have come against ranked teams.

Meanwhile, defending national champion Texas Lutheran (23-4) has won 15 straight, and 19 of its last 20, to move up to the second spot. Three of the Bulldogs’ four losses this season were to schools that can offer athletic scholarships (two Division II and one NAIA).

Linfield (25-3), which had held the top spot in the poll for the past three weeks, dropped to third after being shut out by Lewis & Clark in the first game of a four-game series over the weekend. The Wildcats did rebound to win the final three games of the matchup.

Elsewhere, Eastern Connecticut (18-0) continued its climb up the rankings, gaining two more places this week, going from seventh to fifth. The Warriors have now won 31 of their last 33 games, and haven’t lost since May 26, 2019, when they fell 3-2 in an eight-inning heartbreaker to eventual national runner-up Emory at the NCAA Championship finals in Tyler, Texas.