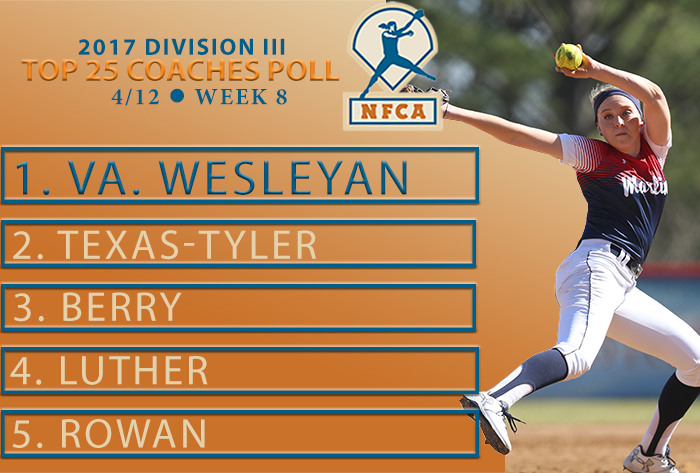 The (35-1) Marlins swept then-No. 16 Randolph-Macon and Roanoke in a pair of Old Dominion Athletic Conference doubleheaders to continue as the top team for a second-straight week. Then on Tuesday, they extended their win streak to 19 games by taking two at Eastern Mennonite.

Texas Lutheran (30-4) moved up two more places to crack the top 10, following another stellar week in the circle and on offense. The Bulldogs got a seventh no-hitter from junior pitcher Maitlin Raycroft, who extended her Division III single-season record in that category, and two wins apiece from Raycroft and Amanda Lochte, who limited opponents to just eight hits over four games last week. Meanwhile, the lineup was busy outscoring their opponent in the four contests, the University of Dallas, 40-2. Texas Lutheran has now won 30 straight since opening the season 0-4.

New this poll this week are Saint Benedict (Minn.) at No. 24 and Rensselaer in the receiving votes category. The (21-5) Blazers have won 10 straight, including four victories last week, while the (14-4) Engineers have won six of their last seven.