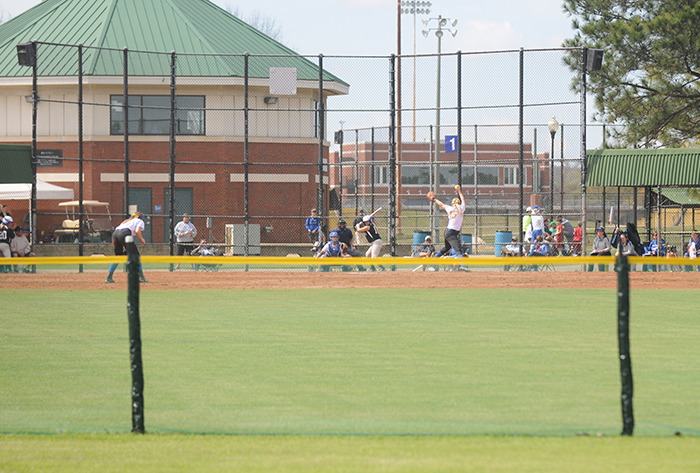 Columbus, Ga. – Highlighted by a no-hitter, the 2017 NFCA NJCAA Leadoff Classic kicked off on Friday at the South Commons Complex as 22 teams stepped on the field for the first of three days of competitive softball.

In a contest between Temple College and Shelton State, Leopard hurler Dalilah Barerra was nearly flawless in the circle, twirling a no-hitter in Temple’s 1-0 victory. The freshman fanned 16 Buccaneers, including the first nine batters she faced. Only three batters reached base two via walks and a seventh-inning error.

No. 1 Jones County put on an offensive show, outscoring its opposition 38-1, defeating No. 19 CCBC Catonsville, 13-0 and Sinclair, 25-1 in a pair of five-inning affairs. No. 2 LSU Eunice registered nine runs in each of its victories, 9-1 (5) and 9-4 over Sinclair and Illinois Central, respectively.

The fifth-ranked Kirkwood Eagles broke a 3-3 tie with run in the top of the seventh to edge Northwest Florida State, 4-3 and went on to complete its undefeated day by scoring 10 first-inning runs in a 13-0 thumping over CCBC. No. 6 DMACC pulled away late in both their triumphs, defeating John Wood, 7-1 and Labette, 8-2.

Wallace State won both its contests with some seventh-inning magic. Trailing 1-0 against No. 9 Midland, Bailee Daugherty sent it to extras with a pinch-hit homer in the bottom of the seventh. After allowing two runs in the top of the eighth, the Lions scored three runs without the benefit of hit to win, 4-3. In their nightcap, they entered the top of the seventh tied, 1-1, with the Leopards and proceeded to scored three runs to come out on top. A bases loaded walk put them ahead for good and a two-run double by Taylor Beshears added insurance runs. Beshears finished 4-for-4 from the leadoff spot.

Second-ranked Chipola received two strong complete-game efforts from Morgan Goree and Krystal Goodman. Goree twirled a one-hit shutout with nine strikeouts in a 4-0 victory over Central Alabama. Only two base runners reached, courtesy of a leadoff single and a one walk. Goodman struck out 12 and allowed just two hits and two runs in a 4-2 triumph over Shelton State.

Indian Hills went to extras to complete its 2-0 day as Sierra Walton launched a grand slam in the top of ninth to lift the Warriors to an 8-4 comeback win over Gulf Coast State. In its opening Indian Hills toppled Florida State College, 11-3 in five innings.