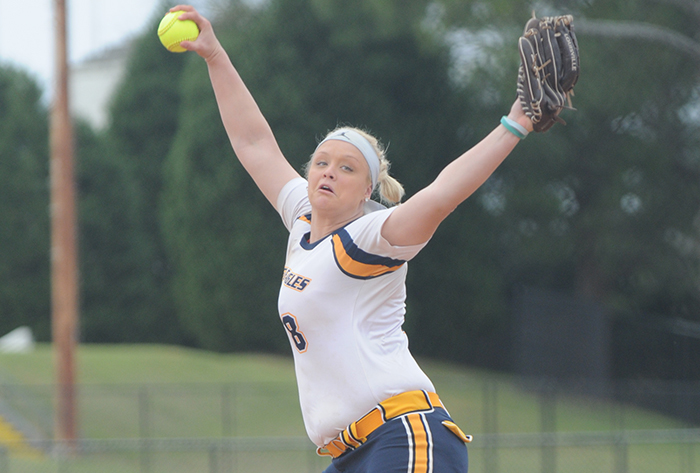 Columbus, Ga. – Day two of the 2017 NFCA NJCAA Leadoff Classic was highlighted by a perfect game, three walk-offs and five teams that finished 2-0 at the South Commons Complex

Chipola’s Morgan Goree put forth the top pitching performance of the Leadoff twirling a perfect game in a 3-0 win over Wallace State. The freshman southpaw dazzled as she struck out seven Lions and did not allow a single runner to reach base. This outing came off the heels of her one-hit masterpiece on Friday.

Behind a pair of strong outings in the circle, Division III’s Rock Valley College improved to 4-0 with triumphs over Division II foes Illinois Central, 4-1 and Lansing, 2-1. A 14-strikeout showing by Kelsie Packard (pictured above) and a four-run fifth lifted the Golden Eagles to the opening win, while Eden Meir tossed a two-hit complete game with four punchouts in the nightcap versus the Stars.

Also taking its tournament mark to 4-0 and extending the program’s undefeated start to 17-0 was NJCAA Division II No. 1 Jones County. The Bobcats passed a tough test, knocking off No. 6 Des Moines Area and No. 5 Kirkwood by the scores of 5-2 and 5-0. After defeating the Bears, the Bobcats received a gem from Karli Perque. She held the high-powered Eagles’ offense to just one hit with five strikeouts, while the offense scored five runs on seven hits in the fifth.

Labette earned the biggest upset of the tournament so far as the Cardinals picked up a 3-1 win over NCAA DII No. 2 LSU Eunice. A strong complete-game outing in the circle by Ashlyn Godown and a two-run seventh lifted Labette to the victory. Earlier in the day, Kassidy Smith tossed a five-hit shutout with three strikeouts and Whitney Way stroked a RBI double for the Cardinals in a 1-0 triumph over Sinclair.

Northwest Florida allowed only one run in each contest as it posted 4-1 and 10-1 (5) wins over Indian Hills and NJCAA DI No. 9 Midland, respectively. Central Alabama scored six runs in each of its victories over Gulf Coast and Indian Hills. In the latter contest against the Warriors, Katie Watson erased a 3-2 deficit with a two-out grand slam that stayed just fair in the bottom of the sixth.

In a pair of contests featuring top-ranked programs, walk-off hits sent No. 5 Kirkwood and No. 9 Midland off with exciting one-run victories. The Eagles roared back from 6-0 and 9-6 deficits before 2016 Schutt Sports NFCA NJCAA National Player of the Year Taylor Nearad (pictured front page) roped a game-winning double to the fence in right center for a 10-9 victory over No. 2 LSU Eunice. The Lady Chaps jumped out to a 4-0 lead only to see No. 2 Chipola peck away and eventually tie it in the top of the seventh. However, Kassie Maddox ripped a single right back up the middle in the bottom half of the frame for the 5-4 victory.

The day ended with a wild 15-14 win for Sinclair over John Wood in a game that saw 31 hits, a nine-run inning and in the end a walk-off. Sinclair’s Kierah Parker had an amazing game, going 5-for-6 with a pair of doubles, five runs scored and three stolen bases, while Lacey Steele registered four hits and knocked in five runs, including the game-winner in the bottom of the seventh. Katie Clapp and Millie Moyer each recorded three RBI for the Blazers.

The tournament wraps up tomorrow with 11 games, six of which are slated for a 9 a.m. first pitch.