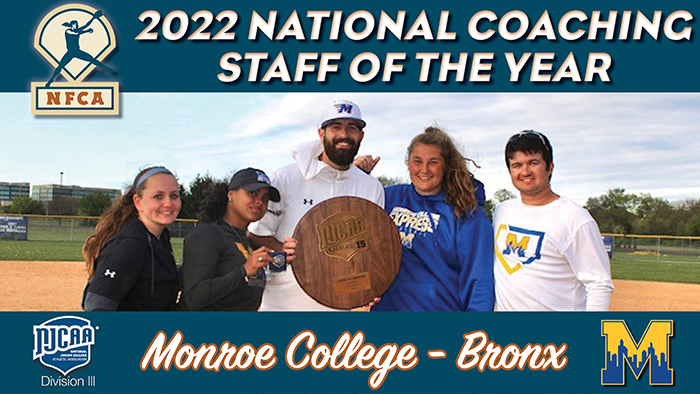 LOUISVILLE, Ky. –Monroe College-Bronx was voted by its peers as the 2022 NFCA NJCAA DIII National Coaching Staff of the Year, the Association announced on Monday afternoon.

It was a historic season for Monroe under the guidance of head coach Connor Moriarty and assistants Leidaly Garcia, Stephanie Barbar, Anastasia Pennacchio and Mike Labella. The Express’ season culminated with a 27-16 record and remarkable 24-win improvement from the 2021 campaign. They captured their first-ever Region 15 championship and Northeast District title, which resulted in the program’s first berth to the NJCAA Division III Softball Championship. With a 3-0 victory over No. 6 Middlesex, Monroe earned a seventh-place finish at the national tournament.

Moriarty, hired as Monroe’s first head coach in 2018, just completed his third season (did not play in 2020). Along with the success on the field, the Express softball program has boasted a 3.0 GPA or better each year.

The national coaching staff of the year award is voted on by NJCAA DIII member head coaches. Moriarty and his staff will be recognized at the NFCA Awards Brunch on Dec. 10 at the 2022 NFCA Convention in San Antonio.