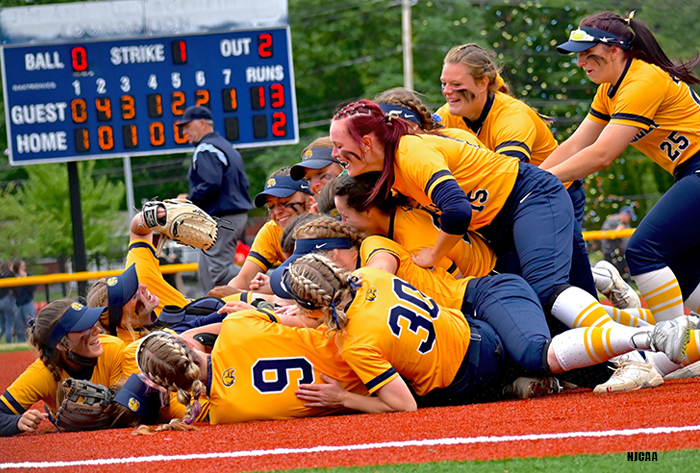 Continuing their own record for most consecutive national titles across all three NJCAA divisions, the Golden Eagles dominated the tournament from start to finish, outscoring it opposition, 57-3.

Crowder took an early 1-0 lead on Jill Murray’s RBI single in the bottom of the first. RVC (51-7) responded with four runs in the second and three more in the third for a 7-1 advantage.

Murray got one run back for the Red Barons (37-3) with a run-scoring single in the third. However, a two-run double by Fudge in the fifth and Polsfuss’ pinch-hit two-run single in the sixth put the game out of reach.

Ashton Melaas (19-3) earned the win in 6.2 innings of work. She allowed two runs on six hits with six strikeouts and zero walks.

Murray finished 2-for-3 with two RBI for Corning, while teammates Kiarah Grover (3-for-4, run) and Jodie Burdick (2-for-3) contributed to the Red Baron offense.

Rock Valley advanced to the Championship Game with an 8-0 victory over No. 2 Corning in six innings. The Golden Eagles broke the game open and ended it early with a four-run sixth. Melaas twirled a one-hit shutout, striking out five and walked two. Kayla Freiberg finished 3-for-4 with an RBI and two runs scored.

Corning rallied from a 3-1 deficit and edged Herkimer, 4-3, to earn a trip the title game. Trailing 3-1, the Katie Kersch singled home Lexi Wood to make it 3-2 in the fifth. An inning later, Jodie Burdick evened the score at three with an RBI infield single. She would come around to score the winning run on an error.

North Dakota SCS scored two runs in the bottom of the sixth to rally past College of DuPage for a 7-6 victory in the fifth-place game.

In the decisive sixth, Jayante Kotila tied the contest with an RBI single and came around to score the winning run on a passed ball. Sydney Schott, who entered in the fifth, closed the door on the Chaps with a 1-2-3 seventh.

Schott earned the win in relief. She surrendered a run on one hit with two strikeouts and two walks. Demi Uffelman, who went four-plus innings in the start, and Billie Donohue each hit two-run homers for the Wildcats.

Kelsi Warren was 2-for-4 with a run scored, while Amber Dasenbrock was 1-for-2 with a two-run triple and two runs scored for College of DuPage.

Suffolk County broke a 3-3 tie with a five-run bottom of the sixth to defeat Rainy River, 8-3, and capture the seventh-place game.

In the decisive sixth, the first two runs scored on an error. Jenna Argento and Ashley Mathes recorded back-to-back RBI singles before Jaden Thompson closed out the scoring, touching home on a passed ball.

Mathes finished 2-for-3 with a RBI and run scored, while Thompson scored three runs. Merissa Kerry and Mariah Leahy each recorded an RBI for Rainy River.